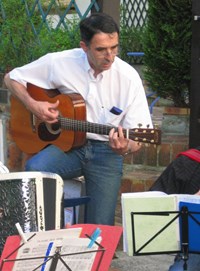 A seasoned folk and blues guitar player, the CEA-Cadarache director has long played the semi-professionnal circuit.
In the weeks that followed Fukushima a few things changed at CEA-Cadarache. "We had to ask ourselves new questions," explains Director Maurice Mazière. "Nuclear safety has always been about thinking the unthinkable. Now, after Fukushima, the unthinkable must be redefined ..."
It had gone without saying, for instance, that in the case of a power failure in a nuclear installation, redundant diesel generators would automatically provide electricity wherever it was needed. This safeguard, however, did not work in Fukushima where the generators were drowned by 15-metre-high waves from a monster tsunami.

Tsunamis, of course, are unlikely to happen in Cadarache. "Still," confides Mazière, "what happened in Japan has led us to ask ourselves some hard questions." Some of these "hard questions" have led to swift action: on the Jules-Horowitz Reactor (RJH) work site, diesel generators were moved to higher grounds—some 15 metres above the original location.
Also, more-or-less-dormant research projects on severe accidents have been revived. For years CEA-Cadarache had been conducting studies and accumulating data on the behaviour of corium, the molten lava that results from core meltdown; this project, termed "Vulcano," is now receiving high priority.
Interest in "passive system" concepts, developed years ago by CEA's Reactor Studies Department, has also been renewed. "The ultimate safety challenge in a reactor," says Mazière, "is the evacuation of residual power when all cooling systems fail. Ideally, in a 'passive system,' heat evacuation occurs naturally. We are assigning new teams to pursue the development of such systems."
Thirty-six years after he first passed the gates of Cadarache as a young intern from École Centrale in Paris, Maurice Mazière has to steer CEA's largest nuclear research centre in the post-Fukushima world. "I see Fukushima as the starting point for a deep reflection process. We have to ask ourselves the right questions, dig into the tiniest details and devise rescue systems able to withstand 'unthinkable' events or situations. Whatever political decision might be taken in the future, we will continue, in the meantime, to stick to the course we've set."