The contributions of the Efremov Institute to ITER 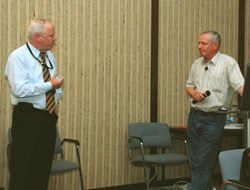 They have known each other for ''donkeys' years: ITER Deputy Director-General Rem Haange (left) and guest speaker Alexander Alekseev.
Even though he was announced as an "invited guest speaker," for Alexander Alekseev it was a bit like coming home. Many of the attendees gathered at the auditorium to hear him speak waved at the familiar face of the head of the Research Laboratory in the Department of Mechanics at the Efremov Institute in St. Petersburg.


Others came down the stairs to shake hands with the friend they had worked with before in one place or another. ITER Deputy Director-General Rem Haange, for instance: "We have known each other for donkeys' years," Rem said as he introduced the guest speaker with whom he had collaborated in Naka, Japan, during the ITER Engineering Design Activity (EDA) phase. "Alexander is a well-known engineer who has worked on almost any fusion device you can think of."


In his talk on the contribution of the Efremov Institute to the design and structural analyses of ITER, Alexander Alekseev summarized the many contributions his institute had made to the various fusion devices, including T-15, GLOBUS-M, KTM, KSTAR, W7-X and T-15MD. And for more than 20 years his team has contributed to the design and structural analysis of many ITER systems, like the magnet system, the vacuum vessel and the divertor.


Since 2010, Alexander Alekseev has been responsible for the design and analysis of the enhanced heat flux first wall.
Click here to download the presentation.