Change at the helm in Rokkasho 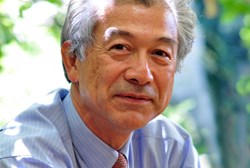 Hiroshi Matsumoto is taking the helm for the interim period. He's a familiar figure to ITER staff, as he headed the Office of the ITER Director-General from 2007 to September 2010.
A fusion veteran who began his career in the industry as a gyrotron developer and later joined the Tore Supra project in Cadarache, Pascal will continue to be part of the great adventure. "I am back at CEA; I will keep contributing to the fusion program here. ITER, of course, is a project I feel very close to."
Back in Rokkasho, a familiar figure to all ITER staffers is taking the helm for an interim period. Hiroshi Matsumoto, who headed the Office of the ITER Director-General (ODG) from 2007 to September 2010, sees his present mission as "reorganizing the IFMIF project team so that we can seamlessly work with home teams in Japan and Europe and truly form one integrated team—one big family."
An experimental plasma physicist during the first phase of his professional career, Hiroshi had to develop different skills when he joined the ITER Organization as Head of ODG. "At ITER," he recalls, "I used to see myself as a kind of "butler"—the person who solves the organizational problems that nobody really wants to take care of. In that context, I did learn a lot. So now, it is time for me to put into practice at IFMIF the lessons I learned when I was at ITER."