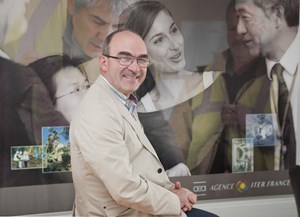 ''What is expected of me is a lot like what I've been doing throughout my career as a naval officer,'' says Pierre-Marie Delplanque, recently appointed as Managing Director by AIF. ''It will be about organizing and coordinating, negotiating and convincing ...''
The ITER Itinerary begins at Port de la Pointe, on the northern shore of the Étang de Berre, a 155-square kilometre body of water on the west side of Marseille that is open to the Mediterranean. This is not, however, the main reason why Agence ITER France recently appointed a Rear Admiral to manage and coordinate future operations along the ITER Itinerary ...


"What is expected of me is a lot like what I've been doing throughout my career as a naval officer. The job as Directeur délégué (Managing Director) will be about organizing and coordinating, negotiating and convincing ..." explains Pierre-Marie Delplanque, a Navy Officer for 37 years and the former "Pasha" of the 2,400-person Marine Fire Battalion (Marins-pompiers) of Marseille.
A naval officer's life is not just about sailing and commanding ships and flotillas—or even flying embarked helicopters, which Pierre-Marie Delplanque did for some 12 years at the start of his career.


Evacuating nationals from war-torn countries, fighting against drug and arm trafficking in the Indian Ocean or against pirates off the coast of Somalia can also be part of the job. "The scope was quite large, the métiers quite different. Let's say that first and foremost, the job required adaptability ..."
And diplomacy also: "I've been in many operations that involved several nations, within NATO for instance, or different agencies or institutions. Even in my last post as Commanding Officer of the Marseille Marine Fire Battalion, diplomacy was paramount."


The experience will prove extremely valuable when it comes to coordinating the actors involved in the transportation of the ITER components along the Itinerary. "We will work with the State administrations, the Port Authority, the local governments and municipalities, the security services, the motorway company ... and of course the local population."


Beginning in mid-2012 and for a period of five to six years, several hundred "especially exceptional convoys" will travel nightly along the 104 kilometres of the ITER Itinerary, passing through 16 villages and cutting through the A7 and A51 thruways in four different locations.