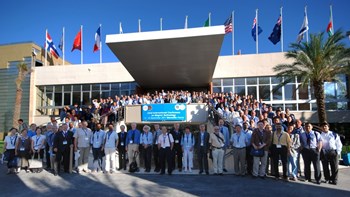 The ''magnet family united'' in front of the Marseille conference venue, Parc Chanot.
It is with obvious respect that the visitors moved through the hallways and portals of the ancient Basilica of Saint-Maximin, where organist Pierre Bardon played Bach's Toccata and Fugue on the pipes of the 250 year old organ. The mastery of the fugue has not lost its fascination. The organ concert and the subsequent banquet in the festively illuminated courtyard of the adjacent convent were the closing chord of the 22nd Magnet Technology (MT) Conference that that took place in Marseille last week.


First established in 1965, the MT is the world's largest gathering in this field. Every two years it brings together the world's foremost experts on magnet technology in order to advance various applications: from the MRI machines that allow for the non-invasive examination of the human body; to high-energy particle physics; and finally on to fusion, where "superconducting magnet technology is critical to future commercial exploitation," as ITER Director-General Osamu Motojima stated in the conference's opening speech on Monday 12 September. 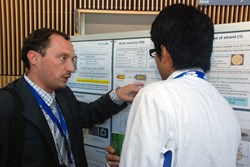 
In his plenary talk "A century of critical temperature," the Grand Seigneur of Magnet Technology Martin Wilson gave an entertaining summary of the developments in the field over the past 100 years. In one highlight, he described the "birth hour" of applied superconductivity during the the 1987 meeting of the American Physical Society. "News had spread about the breakthrough of high-temperature superconductors and everybody wanted to hear more about this thrilling news. Lectures were given and discussed until 2:00 a.m. and there was almost no way to get into the packed rooms." This event later made it into the history books as the "Woodstock of Physics." 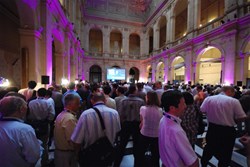 ''I think what we're seeing here is genuine growth in the interest in magnet technology,'' commented conference Chairman Neil Mitchell.
Fifty years later, the technology is well established, but R&D never stops; this 22nd edition of the MT conference featured papers on the development of applications using the new generation of High Temperature Superconductors. "The MT is a forum for exchange of information where, in particular, the companies working on industrialization of discoveries interact with the clients who want to use the products," explained Neil Mitchell. "It's not only new discoveries, but also improved techniques for manufacturing old technologies that comes up. The interfacing nature of the conference makes it popular."


In a special ceremony on Monday, this year's IEEE awards for continuing and significant contributions in the field of applied superconductivity were presented. This year's winners were:

Finally on Friday, 16 September, before the participants made their way back to homes in the east and the west, the stage was clear to invite all assembled to the 23nd Magnet Technology conference that will take place in 2013. "See you in Boston!"