Components will travel "in a bubble" 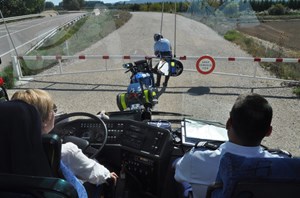 
One of the differences, of course, is speed and frequency. While cyclists in the annual Tour de France reach speeds in excess of 100 kilometres per hour, most of the ITER convoys will travel at the speed of a walking man, slowly progressing along the Itinerary for up to five consecutive nights to reach Cadarache. Convoys along the Itinerary will be organized every 8 to 10 nights over a period of five to six years, beginning in 2013.


These anecdotes, and a lot more serious and precise information, were provided last Wednesday to members of the Commission Locale d'Information (CLI) as they toured portions of the ITER Itinerary with Agence Iter France directors Jérôme Pamela and Pierre-Marie Delpanque and French Gendarmerie Major Renaud Coste.


The 212 planned special convoys, representing some 445 nights of activity along the Itinerary, will be spectacular events, but also potentially disruptive for the local residents. 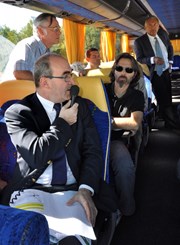 Agence Iter France managing director Pierre-Marie Delpanque and French Gendarmerie Major Renaud Coste gave CLI members a guided tour or the ITER Itinerary.
As Pierre-Marie Delplanque confided in a recent Newsline interview, associating the residents "and hopefully, gaining their enthusiasm" is one of the challenges of the whole operation. Information and communication, in this perspective, will be paramount.


In order to reduce the disruption during the night for residents, Delpanque and the Coordination Cell he's leading have come up with some interesting initiatives: gendarmes regulating the traffic, for instance, could trade their powerful (and noisy) BMW and Yamaha motorbikes for humming electric three-wheelers ...


Another category of residents will be the object of careful attention during the transport of ITER components along the Itinerary.


Like humans, the birds nesting in the salt farms near the Port de la Pointe, where the ITER components will be unloaded from the barges, dislike disruption during the night.


As a consequence, their territory will be the only one crossed by the ITER convoys during the day...