New head of the ITER Department at European agency 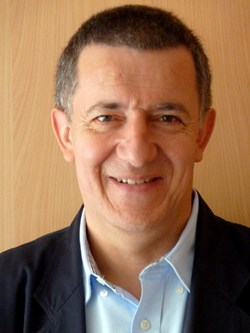 Another ''accelerator man'' joins the fusion family: Jean-Marc Filhol, the new head of the ITER Department at F4E.
Jean-Marc Filhol, a French national, took up his duties on 1 August as head of the ITER Department at the European ITER Domestic Agency "Fusion for Energy" (F4E). He brings onboard vast expertise in project management within large international scientific facilities and has a solid scientific and technical background. As head of the ITER Department, Jean-Marc Filhol will be responsible for managing the European contributions to the ITER Project in line with the agreed baseline and annual ITER work plans.
"ITER is a major international scientific project and I am really looking forward to supporting F4E in its important mission," says Filhol. "I feel that my previous knowledge and experience will help F4E's ITER Department rise to the challenges ahead and I am very pleased to be part of the F4E team."
An engineer with a PhD in nuclear instrumentation, Jean-Marc Filhol has developed the major part of his career in the field of particle accelerators. He was most recently director of the Accelerators and Sources Division as well as deputy director general at SOLEIL, a third-generation synchrotron radiation facility built near Paris, France. During this time, he was in charge of the operation and development of the radiation source, but also handled the safety aspects, management plan and quality insurance policy in addition to dealing with the follow-up of the construction plan for the phase 2 beamlines. During 2001-2007, Filhol was project director at SOLEIL where he was responsible for the construction of the accelerator and infrastructure programs.
During 1987-2001, Jean-Marc Filhol held several positions at the European Synchrotron Radiation Facility (ESRF) in Grenoble, France, the world's first large synchrotron radiation facility developed to enable observation of the structure of matter down to the level of atoms and molecules. In 1997-2001, he was director for the Machine Division and before that, operation manager in the same division. From 1987-1993, he held the position of accelerator physicist responsible for the final design, construction and commissioning of the Booster synchrotron.
During 1981-1987, Jean-Marc Filhol conducted accelerator physics research and development at CEA, the French Alternative Energies and Atomic Energy Commission.

As well as participating in many international scientific and technical advisory committees (in particular the IFMIF EVEDA Project Committee within the framework of the Broader Approach agreement) Jean-Marc Filhol has contributed to numerous international conferences and workshops and has lectured in accelerator physics.
In addition to his mother tongue French, Jean-Marc Filhol is fluent in English and has an intermediate level of German. He is married and has three children.