Professional bonds within a unique project 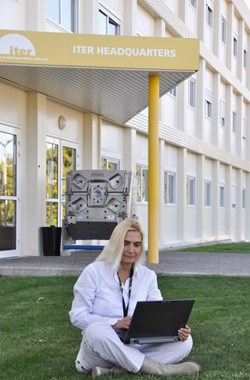 Liliana, who in addition to her mother tongue speaks English and French as well as some German, has ''never felt limited by cultural or language differences.''
Wanted: a position as design engineer in a large-scale, international project having the potential to mark history. Cultural and language differences no object. Offers for routine positions will not be considered.


This is the job announcement that Liliana Teodoros might have posted as she left Romania as a newly minted mechanical engineer in 2009, eager to put her knowledge to the test and gain experience. One year later, while working towards her PhD at the Niels Bohr Institute, University of Copenhagen in Denmark, she came across an ITER job offer.


"I wanted to work as part of a unique and important project where I would have the opportunity to add to my skills every day," says Liliana, who joined ITER in February of this year. "For an engineer, ITER is the 'pearl' of all challenges. The fact that people from all over the world have come here to work toward the same goal makes the experience all the more exhilarating."


Liliana works as a cooling water system engineer for ITER's cooling water system, which is responsible for dissipating the tremendous operational heat of the ITER Tokamak and auxiliary systems—radio frequency heating, magnet power supplies and cryogenics among them. The size and scale of the system make it unique: dozens of kilometres of piping, combined flow rates of up to 33 cubic metres per second, and interfaces with more than 25 plant systems.


"The chillers, the pumps, the flow control and regulation systems, the basins and the cooling towers will all be dimensioned at ITER for the large-scale cooling needs of the project," explains Liliana. "It's a challenging system in terms of scale. During the development phase of the system, members of our Section interfaced with nearly every other ITER department."

To find out more about the cooling water system, click here.