From "snowballs in hell" to "burping the baby" 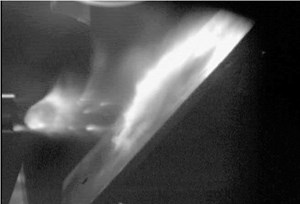 A large (+16 mm) pellet is undergoing testing for ITER disruption mitigation. In this photo, the pellet (left) is exiting the guide tube just before hitting a simple target plate. It will shatter once it hits the plate. (Photo: Combs, ORNL)
Heated to extreme temperatures of up to 150 million degrees Celsius, the plasma in ITER's giant experimental fusion reactor will be fed a fuel of frozen pellets of deuterium-tritium, fired into the tokamak vacuum vessel by pellet injectors. Testing of the most recent pellet injection design technology developed by Oak Ridge National Laboratory and US ITER is under way this fall at the DIII-D research tokamak in San Diego, operated by General Atomics for the Department of Energy through the Office of Fusion Energy Sciences.


The design, testing, and manufacture of this pellet injection system is one of the key contributions of the United States to ITER. Physicist David Rasmussen serves as the lead for US ITER's fueling team and as a group leader in the Fusion Energy Division at Oak Ridge National Laboratory. He points out that understanding of the plasma fuel in a fusion reactor has evolved over several decades, and pellet injection is now seen as a compelling method to control potential plasma instability inside the reactor. The US ITER fueling team, which includes physicists, engineers, technicians, and other experts, collaborates closely with the international fusion science community to integrate key research findings in plasma fueling and control.


The pellets are made of deuterium and tritium, isotopes of hydrogen that are frozen at 11 degrees above absolute zero Kelvin. When they are fired into the tokamak by a pulse of high-pressure gas, they vaporize and the particles are ionized, becoming part of the plasma. Inside the tokamak, the deuterium particles are heated up to as much as 200 million degrees Kelvin, or more than 10 times the temperature inside our sun.


"When we send a frozen pellet into a high-temperature plasma, we sometimes call it a 'snowball in hell,'" Rasmussen said in an interview. "But temperature is really just the measure of the energy of the particles in the plasma. When the deuterium and tritium particles vaporize, ionize, and are heated, they move very fast, colliding with enough energy to fuse." The energy released from the fusion reaction, as energetic neutrons and helium, has potential as an abundant, carbon-free energy source.


But pellets are not just about fuel. Research has found that the pellets can also control spontaneous instabilities which occur at the edge of the plasma, called edge localized modes (ELMs). If the full energy of these ELMs is absorbed by the machine, erosion of plasma-facing surfaces can occur. Small pellets can be used to reduce the size of the ELMs into more frequent but less harmful events, a task researchers like to call "burping the baby," Rasmussen said. In addition, larger pellets about the size of a wine cork can be injected to break down the plasma column altogether. This contingency comes into play should operators need to stop the plasma racing around the reactor. The large pellets can collapse the plasma "to give it a safe landing," said Rasmussen.


The fueling and instability issues are caused by the nature of plasma itself. Plasma, the fourth state of matter, is an ionized gas that includes positively and negatively charged particles. "We apply very high magnetic fields, and the plasma reacts to those," Rasmussen explained. "The plasma has its own internal currents, and a whole menagerie of instabilities depends on those internal currents. The ELMs are the ones that occur near the outside edge. These are filaments, basically, that spiral around. Such bursts can be intense and can damage the plasma-facing surfaces."


Researchers are experimenting with injecting small pellets, a couple of millimeters in diameter, at the plasma edge. This approach imposes additional magnetic fields that break up the ELM spirals into smaller events. "We put a little chaos near the edge," noted Rasmussen. "That tends to make these things unstable, so the edge releases these spirals in a more predictable way."


The researchers have gone through a couple of iterations of the injector that provides these small pellets. They have recently installed a new design on the DIII-D tokamak that is now being tested. The test reactor DIII-D now uses only deuterium pellets, but ITER will use both deuterium and tritium. The researchers are also experimenting with pellets of neon and argon to control plasma events. Research is also proceeding on the wine cork-sized pellet for collapsing a plasma.


"There are certain conditions where the current gets interrupted and gets out of control," Rasmussen said. "Instead of traveling in a controlled or confined way around the tokamak, it shifts upward or downward in the chamber, and comes into contact with the walls where it can potentially cause damage."


Electromagnetic effects that result from this current shift impact the entire tokamak. One option for controlling such disruptions is to inject a massive amount of gas, which collapses the plasma column and cools it. Large pellets are an option being developed at ORNL, since they can cool the plasma even faster.


The gas to control the plasma is frozen in the injector, then accelerated and bounced off a number of metal plates to break it up into particles before entering the plasma. The metal plates shatter the pellets so that shards are sprayed in at several points. "What you see looking across the tokamak is a spray of pellet particles, and then an intense emission of light. That means we are converting the plasma back to gas," said Rasmussen.


One of the things researchers are now trying to decide is how many large pellets they must inject to collapse the plasma. "We think the number is perhaps 4 to 10 at the same time. We are going to do experiments on DIII-D that will help us identify just how much symmetry is required to make this work well." The DIII-D in San Diego is the largest tokamak in the United States and a "good test bed for the system," Rasmussen said. "We have identified four places on the ITER tokamak where we could do gas injection of very large amounts of gas and also of these pellets."


Rasmussen is very conscious that a major challenge remains: How to extend the physics from the conditions at DIII-D to conditions orders of magnitude greater that are expected in the ITER tokamak, which will be 10 stories high. "It is a fairly big leap from DIII-D to ITER. We work with JET, a larger tokamak device in the United Kingdom, as well on pellet injector experiments, so that is closer to conditions on ITER, but it is not the full ITER conditions."


"In addition to the experiments, we and our international colleagues do a lot of modeling," Rasmussen said. "We have to really understand what effects are going on in DIII-D to create accurate models. Then we can run that model for ITER conditions."


For the original article and more news from the US ITER project, click here.