Share Tweet
ITER Council attests "a sea of change"
The participants to the ninth edition of the ITER Council (17-18 November 2011) in Cadarache, France.

The ample ITER Council conference room, built on the premises of the Château de Cadarache in 2009, was tightly packed as the delegations to the ninth ITER Council took their seats on Thursday morning. Most of the ITER Members had sent not only their foremost government representatives, but also the Heads of Domestic Agencies plus a large number of leading experts in the field of fusion. China sent a record delegation of 14 people, thereby stressing the importance of the project to their nation.
"This, to a certain extent, demonstrates China's great attention to the ITER Project and the ITER Organization," said Luo Delong, director of the Chinese Domestic Agency, in his opening statement on behalf of the Head of the Chinese delegation, Vice-Minister CAO Jianlin, who was attending a high-level meeting in Turkey.


Ninth ITER Council: A cake in the form of the ITER Tokamak is cut by retiring Chair Academician Evgeny Velikhov.
In their opening remarks, all the Heads of Delegations stressed the certifiable progress made over the past months. "The documents presented here by the ITER Organization indicate that there exists a number of positive signs in moving forward," Igor Borovkov, head of the Russian delegation and of the "Apparatus" within the government of the Russian Federation, stated. 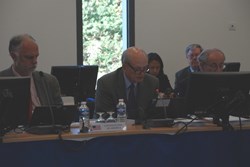 Robert Jan Smits, director-general of the European Commission's Research Department and head of the European delegation, had attended the preparatory the previous day but was called back to Brussels on the first day of the ITER Council meeting by the Commission's President Manuel Barroso. So it was up to Raffaele Liberali, head of the Directorate for Energy within the EU's Research Department, to wrap up the recent developments concerning the ITER Project: "As you can imagine, the European Council and the Parliament closely follow the ITER debate on schedule delay and potential cost increase. So let me be very clear: any new cost or unacceptable cost/risk-increase could be fatal for the project. But if we continue to work together in a spirit of joint ownership, I am confident that we will take the right decisions serving our common objective to secure the complete success of this remarkable project." 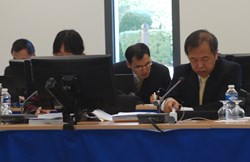 By sending 15 delegates to the ITER Council, the Chinese wanted ''to underline the importance of the project to our nation,'' reported Luo Delong, head of the Chinese Domestic Agency.
Sung Kwang Yang, director-general of the Korean Ministry of Education, Science and Technology, especially praised the efforts made by the ITER Organization to keep the project within the overall project cost and schedule despite the impacts of the Fukushima earthquake. "I believe the actions taken were appropriate to enhance the reliability of the ITER Project. In order for this strategy to be executed, we must realize that fusion energy is our future energy source which will be made viable through the ITER Project. I would also like to emphasize that the governments of all Members must give constant support to the ITER Project in spite of the economic depression. ... We must not forget that the ITER Project is drawing international attention since fusion energy is achieving recognition as a future green energy source."


During a break in the discussion, Council delegates had the chance to tour the construction site which left them impressed by the progress that had been made since their last visit one year ago.


This ninth ITER Council meeting was also the end-of-term for the Chairman Evgeny Velikhov. He will be succeeded in the position by Hideyuki Takatsu, the deputy director-general of the Japanese Domestic Agency, with Edmund Synakowski, director of the Fusion Energy Science within the US Department of Energy, acting as his deputy.


It was agreed that the tenth meeting of the ITER Council will be held on 20-21 June in Washington DC; the eleventh meeting in November 2012 will be held in the brand-new ITER Headquarters.


More photos of the Council Meeting can be found here.