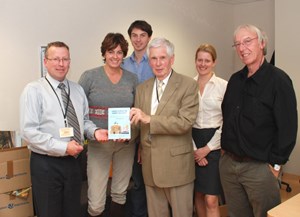 Mike Forrest handing over a copy of his book to the ITER Newsline team.
Fusion research programs were somewhat in the doldrums when, in 1968, Russian Academician Lev Artsimovitch claimed that the Soviet Union had achieved temperatures of 10,000,000 degrees inside the T3 Tokamak based at the Kurchatov Institute in Moscow. The news was received "with considerable skepticism by fusion laboratories outside the Soviet Bloc," recalls Mike Forrest, who was a member of the four-person team sent by British authorities to Moscow to verify the results.
In Lasers Across the Cherry Orchards, Mike takes readers from his first days as a researcher experimenting with lasers inside of the hangars at Harwell (located next to vast cherry orchards), to the historical mission to "Laboratory Number Two" in Moscow, home to the Soviet Union's nuclear weapon program.
The book is interesting reading for all those who are keen to learn about the state-of-the-art diagnostics at the time and the problems encountered installing the tool on T3. "As soon as we went to the basement under the tokamak where our laser would be mounted, we could feel severe vibrations under our feet from the huge flywheel generators that powered the T3 machine," Mike writes. "The sand under the concrete floors had sunk leaving the floors to act like the skin of a drum."
The breakthrough finally came on 22 July 1969. The proof came from a cryptic note in Derek Robinson's notebook ("Indicates Te=1 K eV") and a polaroid photo showing "totally unambiguous evidence of Thomson scattering." The news spread around the world like a bushfire. The respected science journal Nature held the press on its Centenary Edition until the T3 scattering results had reached them. The story even made it to the UK House of Lords: when one peer inquired how on earth the researchers had managed to measure a temperature of 10 million degrees he was told, "I suppose they used a very long thermometer."
The book is also a very entertaining recollection of a bit of exceptional scientific collaboration set against the backdrop of the Cold War. "We did not think the KGB would pose any problems as long as we did nothing silly. We felt safe, enjoying the powerful patronage of Lev Artsimovitch [...] However, we were to find that the KGB activities were not a figment of the imagination, even in our privileged position. Soon after we arrived Derek and Marion Robinson pointed to at least one advantage of being 'bugged.' One breakfast time they had commented out loud that a bulb had burnt out in the kitchen and debated who to ask for a replacement. When Marion returned from her routine morning shopping tour she found the bulb had been replaced..."
To order the book or contact Mike Forrest, please click here.
Further reading: "Off to Russia with a thermometer"