A lot to talk about 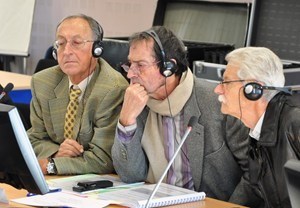 President of the Public Enquiry Commission André Grégoire (centre) and colleagues Michel Thibault (left) and François Coletti listen intently as ITER Deputy Director-General Carlos Alejaldre presents the most recent developments in the ITER Project.
Several important things have happened since the ITER Organization and the Local Information Commission (CLI)—the independent body that acts as an interface between a nuclear operator and the local public—met for the last time in mid-June.


On the ITER side, missions were sent to Japan in order to assess the consequences of the earthquake and tsunami for the project; two new deputy-directors had been appointed; and the ninth ITER Council had convened on 17 and 18 November in Cadarache.


On the local side, the most important event was of course the ten-week-long Enquête Publique and the issuing of the final "Favourable Opinion" by the Commissioners. In this context, the ITER Organization and the CLI members had a lot to talk about.


And talk they did, at the CLI's biannual General Assembly last Monday 28 November at the Château de Cadarache. ITER Deputy Director-General Carlos Alejaldre presented the recent progress of the project, noting that, "in spite of the difficulties caused by the situation in Japan, the project schedule remains within the boundaries that were agreed upon in July 2010."


He also summarized the positive outcome of the ninth ITER Council, which had taken note of "the highly productive period of project execution" under the new, reorganized, and streamlined ITER Organization leadership.


The CLI invited André Grégoire, the president of the Enquête Publique Commission, to report on the procedure and explain the nature of the Commissioners' work. Grégoire regretted the discrepancy between the scale of the extremely complex, one-of-a-kind ITER project, and the reglementary procedures that were applied. The "lack of time,"—despite an extension to ten weeks from the original six—had been frustrating, he said.


Despite these constraints and after a painstaking analysis of the 5,000-page ITER safety documents, the Commission, Grégoire explained, agreed to issue a "Favourable Opinion". He noted with satisfaction that "everything that ITER is doing now and will be doing in the future is under the control of the French Nuclear Safety Authority."


The Public Enquiry procedure gave the local public an opportunity to voice its opinion on the ITER Project. The vast majority of the 10,606 contributions however were in the form of petition-like mails or emails—only a few people actually went to meet the Commissioners in the mairies and write in the open registers.