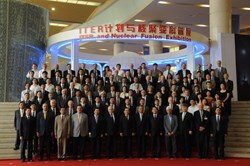 The representatives of the seven ITER Members gathered in Suzhou, China, for the sixth ITER Council.
On 16-17 June, the ITER Council, the Governing Body of the ITER Organization, convened for its sixth meeting. The two-day meeting in Suzhou, China brought together representatives from the seven ITER Members: China, the European Union, India, Japan, Korea, Russia and the United States under the chairmanship of Evgeny Velikhov (Russia).


The meeting opened with a statement from Dr Wan Gang, Minister of Science & Technology of China. Minister Wan welcomed the delegates to Suzhou and underlined China's commitment to the ITER Project, "The Chinese Government gives high importance to ITER and joins hands with the ITER Organization and the other six Members to guarantee the success of the project. ITER will demonstrate to the world that global challenges can be overcome by science and technology." 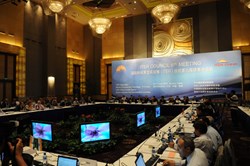 The sixth meeting of the ITER Council in Suzhou, China.
All Members of the ITER collaboration reiterated their support for the project and commended the progress that has been achieved. "In bringing ITER this far, we have together had to face many daunting challenges. With full mutual understanding, good will and family spirit, we have no doubt that we shall be able to find the best way forward to serve our common objective to secure the complete success of this remarkable project," commented José Manuel Silva Rodríguez, Head of the European Delegation.


ITER Director-General Kaname Ikeda gave a detailed presentation of the ITER Organization progress since the last Council meeting. He highlighted the fact that the project is now moving into the construction phase. He commended the strong collaboration between the ITER Domestic Agencies and the ITER Organization that resulted in the detailed papers that were presented to Council. The Director-General pointed out that all Members are now seriously engaged in calls for tender and recognized the steady progress in manufacturing of elements for ITER. "Thanks to tremendous efforts from both the ITER Organization and the Domestic Agencies, about 60 percent of the global Procurement Arrangements for ITER have already been concluded." He noted that construction of the first ITER buildings and the excavation of the Tokamak Pit are expected to start in July 2010.


The ITER Council noted and reviewed reports from its scientific and managerial subsidiary bodies which outlined the progress on subjects such as: the Draft Annual Work Plan for 2011, Financial Audit, the ITER Organization's draft budget for the next years, Export Control, Peaceful Uses and Non-Proliferation, and the Test Blanket Module program. Council approved the annual accounts and balance sheets for 2009. 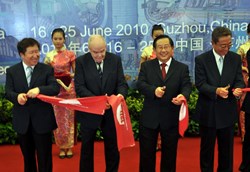 Chinese Vice Minister of Science & Technology Cao Jianlin, Council Chair Evgeny Velikhov, Chinese Minister of Science & Technology Wan Gang, and the ITER Director-General cut the ribbon to open the Suzhou ITER exhibition.
The ITER Members agreed to hold a Council Meeting in Cadarache, France in the last week of July 2010 when all delegations expect to be in a position to complete discussions on the next steps of the ITER Project.


Prior to the opening of the Council meeting, all delegates took part in the opening ceremony of the ITER and nuclear fusion exhibition.


BACKGROUND TO THE NEWS RELEASE
ITER will be the world's largest experimental fusion facility and is designed to demonstrate the scientific and technological feasibility of fusion power. ITER is also a first-of-a-kind global collaboration. Fusion is the process which powers the sun and the stars. When light atomic nuclei fuse together to form heavier ones, a large amount of energy is released. Fusion research is aimed at developing a safe, limitless and environmentally responsible energy source. The ITER Project is sited at Cadarache in the South of France. Europe will contribute 45 percent of its construction costs, while the other six Members to this joint international venture: China, India, Japan, the Republic of Korea, the Russian Federation and the US, will each contribute 9 percent.


Photos of the Council Meeting, the Suzhou Exhibition and ITER can be found at:


Read the press release (in English or in French) here...