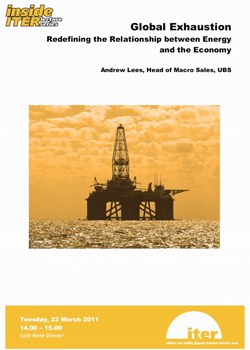 ''I realize that my [royalty] contribution [to ITER] will do little more than buy some refreshments,'' says Andy Lees, ''but hopefully it may help publicize just how important your work is to us all.''
In what promises to be an informative and provocative event, analyst/author Andy Lees will be speaking at the ITER Organization on 22 March, as an invited lecturer for the Inside ITER seminar series.


Andy Lees is known to the ITER community as one of the contributors to The Gathering Storm, a collaborative editorial effort from top players in the financial industry worldwide who have a lot to say about the global "crunch" of the last years...and even more to say about avoiding the next one. Andy chose the ITER Organization as the recipient of his portion of royalties from the book's sale.
In his chapter entitled "In Search of Energy", Andy analyzes the importance of fossil fuels to the world economy, and predicts the economic and political consequences as these fuels become less efficient—and more costly—to produce. "Energy is becoming less efficient to extract and turn into useful work, which can only be offset with greater technology, greater capital and more resources. The cost of energy will rise relative to its value," he writes.
The efficiency of available resource extraction, according to Andy, is falling at such a rate that technology is failing to keep up. He estimates that energy return on invested energy (EROIE) has dropped from 40 to 20 in the last two decades, and will drop further to 5 in the next ten years. "This is a move of unimaginable consequences, completing changing the shape of the global economy," says Andy. "Unfortunately, without a new source of cheap, high density energy, we are in a serious mess."

Andy supports fusion as the solution. "Fusion is the obvious solution to the problem, and whilst it has been a long gestation period to get to where we are, it is the only option on the table. We should not be concerned about the cost of achieving fusion, but rather the cost of not achieving it."