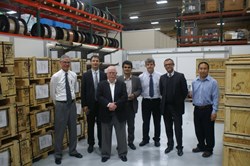 IO, F4E, USIPO and OST representatives standing in front of wooden crates containing the first deliveries of Nb3Sn strands ready to be shipped to Europe.
The manufacturing of ITER's toroidal field coils will require a total of 450 tonnes of superconducting niobium-tin (Nb3Sn) strands. Such a large amount has called for a significant ramp-up of the world production capacity which was estimated around 15 tonnes per year before the start of ITER. The in-kind procurement of the Nb3Sn strands for ITER's magnets is shared among six Domestic Agencies (China, Europe, Japan, Korea, Russia and the US) who have selected a total of eight different suppliers.


Sharing the manufacturing of such a critical component among so many partners is of course quite a challenge. All suppliers are required to implement similar quality assurance and quality control programs in order to ensure that the strands produced all around the world meet the same technical requirements. The web-based Conductor Database developed by the ITER Organization enables the ITER Organization and the Domestic Agencies to closely monitor the ongoing production.


Two of the six Domestic Agencies, the European Agency F4E and US ITER, have selected a common supplier. Oxford Superconducting Technology (OST), located in Carteret, New Jersey, has been awarded contracts for the production of about 60 tonnes of Nb3Sn strands for F4E and approximately 10 tonnes for the US counterpart. To facilitate the work and encourage synergies, all partners agreed to rely on a common strand design and to keep each other informed about the progress made. This synergy was further enhanced through a common meeting organized at OST where all partners reviewed the status of production.


"Our involvement with ITER has been both challenging and rewarding," says Jeff Parell, vice president at OST. "The quantity of strand required by ITER has allowed OST to create more than 60 new jobs, and we now work to produce Nb3Sn strands on an around-the-clock basis. The ITER technical and quality requirements are comprehensive and, as a result, our internal process and quality controls have been strengthened. OST and our parent company, Oxford Instruments, are both proud to be associated with a project of this importance in globally advancing the knowledge of fusion energy."


As illustrated in the picture, OST is now about to proceed with the shipment of its first deliverables to Europe.