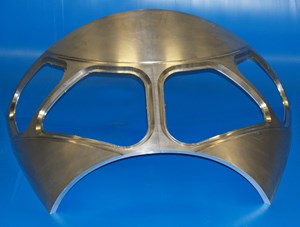 Originally, the explosive metal forming technology used in the R&D project for Airbus was developed to manufacture components for fusion reactors.
"We have made the impossible possible!" it says on the website of the Dutch company 3D-Metal Forming. The company was successful recently in demonstrating its technology—explosive metal forming—in an R&D project for Airbus in which it manufactured complex aircraft components like the cockpit fuselage.


The technology of explosive metal forming was originally developed to manufacture components for fusion reactors. 3D-Metal Forming presses metal plates up to six centimetres thick into every conceivable shape using shockwaves, without the material becoming weak and incurring hairline fractures. "We place the metal plates on top of a mould in a tank of water," explains Director Hugo Groeneveld. "Next, we precisely detonate explosives and the resulting shockwaves in the water press the metal plate into every desired shape. Using this technology we can make amazingly complex metal shapes."


In 2005, 3D-Metal Forming could only process metal plates up to 15 mm thick. "We were then asked if we could scale this up by a factor of four," says Groeneveld. The reason for this request: ITER! The ITER Tokamak has many large, curved components that are difficult to produce using a punch or a press. "3D-Metal Forming possesses a unique technology for applications like fusion reactor components," says Industrial Liaison Officer Toon Verhoeven from ITER-NL.


Based on this request from the fusion community, the company developed a large-scale application of its technology. This work was supported by ITER-NL, a collaboration of Dutch scientific institutions formed to involve Dutch companies in the construction of ITER.


Airbus and 3D-Metal Forming are now investigating a follow-up order. And—hot off the press—3D-Metal Forming is back to the fusion business as well. Just this week, the company was awarded a contract by the European ITER Domestic Agency Fusion for Energy to deliver a series of bimetal tubes as part of a qualification program. 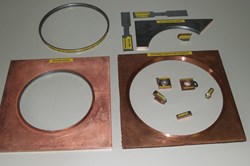 Some samples of explosively welded molybdenum on copper. Courtesy of 3D Metal Forming.
The tubes consist of stainless steel on one end and a copper alloy (CuCrZr) at the other. Explosive welding enables the company to connect these two metals without melting them, ensuring that the CuCrZr maintains its structure. 3D-Metal Forming has also performed explosive welding work of copper on molybdenum for use in the neutral beam injectors for ITER being designed by the RFX-Consortium in Italy that resulted in a very solid bonding of molybdenum to copper, tested under extreme heat loads.

3D-Metal Forming, which trades under the name "Exploform," was founded in 1998 as a spin-off from the "Netherlands Organization for Applied Scientific Research"(TNO).