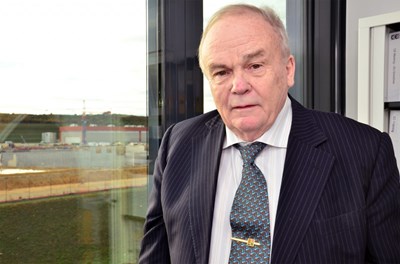 Academician Evgeny Velikhov, whom the ITER Director-General introduced as the ''Godfather of ITER,'' is an ardent proponent of fusion-fission hybrids. For reasons he developed in his Inside ITER presentation, they hold the key to an undispensable ''Nuclear Power Renaissance.''
What can you do with a neutron? In a conventional fission reactor, relatively slow neutrons ("thermal neutrons") split heavy nuclei such as enriched uranium to generate large amounts of energy, on the order of 200 MeV per reaction. In a fusion reactor, the fusion of deuterium and tritium nuclei generates very fast and very energetic neutrons that impact and heat the plasma-facing wall.


If the two nuclear processes could be combined in a hybrid fusion-fission reactor, the fast fusion neutrons could be used to split fertile material such as thorium, natural uranium or spent nuclear fuel contained in the reactor's wall.


The idea of such hybrid reactors has been around for more than fifty years but remained largely unexplored until recently, when the steady state production of fusion neutrons entered the realm of the possible with ITER.


One ardent advocate of fusion-fission hybrids is Academician Evgeny Velikhov, whom ITER Director-General Osamu Motojima introduced at last Wednesday's Inside ITER conference as the "Godfather of ITER."


Velikhov, who made the first proposition of an ITER-like device in 1975, considers that "nuclear power is absolutely necessary to fulfil mankind's goals of development." He acknowledges, however, that nuclear power is presently "in very bad shape" because of a strained relationship with public opinion. Would another major accident occur, he considers, it would be the end of the nuclear industry worldwide.


Pure nuclear fusion of the type that ITER hopes to pave the way to is, of course, a beautiful option . But it will be some time before the first kilowatts of "fusion electricity" can be fed to the grid. And time is running short to provide for mankind's growing needs...


"We need a nuclear power Renaissance," advocates the man without whom ITER would not exist. For reasons he developed in his presentation, the key to this Renaissance in his opinion lies in hybrid, "vital-risk free" fusion-fission reactors.


Academician Velikhov goes as far as to dub this new avenue of research and development "Green Nuclear Power."


A hybrid reactor would have a fusion reactor at its core providing an intense neutron flux that, instead of just heating the water circulating in the plasma-facing wall, would generate high energy fission reactions in the "fertile" material contained in the surrounding blanket (43 MeV in the case of uranium 238; 25 MeV in that of thorium 232).


Velikhov's favoured solution is that of the Molten Salt Hybrid Tokamak (MSHT), in which fertile material would circulate in the blanket modules in the form of liquefied uranium or thorium salt at a temperature in the range of 500 °C.


MSHT's attractions are many: the fusion core does not need to achieve Q≥10 to perform; fast fusion neutrons could be used to partially transmute long-lived radioactive waste from fission reactors into less harmful, short lived waste that is easier to dispose of; and, last but not least, contrary to a conventional fission reactor a MSHT device would be sub-critical—neutrons would not be provided by the chain reaction but by an external source (the fusion core).


MSHTs would eliminate what Academician Velikhov calls "vital risks" such as those posed by conventional fission reactors. "Ordinary risks," he claims, "are manageable in terms of acceptance by public opinion."


In the discussion that followed the presentation, some argued that the circulation of molten-salt in the blanket would be quite difficult to design and manufacture. True, he agreed, but in "pure fusion" as with hybrids, challenges abound and no one can bet on which could be operational first.
Click here to view Academician Velikhov's presentation.