In Padua, the neutral beam test facility is progressing 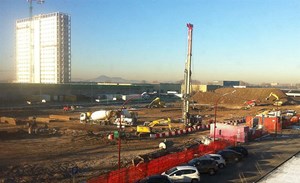 
The PRIMA neutral beam test facility will host the prototypes of the ITER neutral beam injector, which will be tested and developed there. The facility will host two independent test beds: SPIDER (Source for Production of Ion of Deuterium Extracted from Radio Frequency plasma), where the first full-scale ITER ion source will be tested and developed with an acceleration voltage up to 100 kV; and MITICA (Megavolt ITER Injector & Concept Advancement), which will be the first 1:1 full ITER injector aiming at operating up to the full acceleration voltage of 1 MV and a full power (16.5 MW).


Three procurement contracts were awarded during the last months for the manufacturing of PRIMA components. The contract for the SPIDER beam source and vacuum vessel, worth approximately EUR 7.5 million, was awarded to a European consortium formed by Thales (France), Galvano-T (Germany) and CECOM and Zanon (Italy). The contract for the cooling plant system, which will evacuate 70 MW of heat from the SPIDER and MITICA test beds, was awarded to the Italian company, Delta-ti Impianti S.p.A (EUR 8 million).


And finally, a EUR 2.5 million contract was signed for the vacuum and gas injection plant with Angelantoni Test Technologies (Italy), covering the design and construction of the gas injector that will provide the deuterium and hydrogen gas and the vacuum system that will pump (and deter) the gas from spreading.


Procurement of the main industrial contracts for SPIDER will be concluded with the award of the contract for SPIDER's high voltage deck and transmission line, currently in its final stages. From 2013 onwards, the remaining European contracts for MITICA will be awarded.


On site in Padua, the construction of the buildings for MITICA and SPIDER is progressing. This construction is funded by Italy, as part of its commitments as PRIMA host.