Progress on stage and behind the scenes

Share Tweet
Progress on stage and behind the scenes
The ITER site has undergone significant transformation in the past year. Following the completion of the Seismic Isolation Pit for the Tokamak Complex in April 2012, attention turned to site infrastructure works such as the deep drainage networks, critical networks, the creation of a platform Contractors Area (from where the different construction work packages will be managed), and finally the foundation for the Assembly Building. These projects are now in their final phases. As the focus returns to the heart of the ITER platform—the Tokamak Pit, where concrete pouring will resume this year—we asked Laurent Schmieder, project manager of the division for site, buildings and power supplies at the European Domestic Agency Fusion for Energy (F4E), about the state-of-works on the platform and what we can expect to see in the months to come.
K.D. 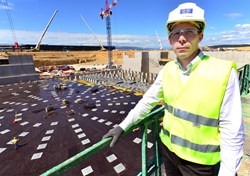 F4E project manager Laurent Schmieder (Division for site, buildings and power supplies) stands above the Tokamak Seismic Pit where concrete pouring on the next-level slab is scheduled to begin in August.
A new phase of construction is about to begin. Can you describe what has been accomplished on the ITER platform since the last major milestone of Seismic Isolation Pit completion?


A lot! In the last six months, our teams have focused on the construction of the Assembly Building foundation slab, an activity that required some excavation, much reinforcement and, since November, concreting work. The Assembly Building slab is about 95 percent complete and will be finished early June. Second, we oversaw the excavation for the deep rainfall drainage network and the installation of hundreds of metres of sizable (two-metre diameter) concrete pipes. These works caused major upheaval on the platform—currently, as we backfill and level, the mountains of dirt are slowly disappearing. Finally, we have erected Contractors Area 2 on the northwest corner of the platform. This area will host contractor workshops, a canteen to deliver 1,500 meals per day, and an infirmary for the welfare of the workers. We have had approximately 250 workers on site these past months; another 200 people in the offices are preparing construction drawings and finalizing ongoing calls for tender. In the next six months, you can expect to see the bottom slab (B2) of the Tokamak Complex take shape. We will also finalize the deep networks and continue the realization of technical galleries around the Tokamak Building.


The European Domestic Agency is responsible for the construction of 39 scientific buildings and dedicated areas on the ITER platform; before each project can start, tender offers have to be launched and contracts awarded. What is the status of contracts?


At F4E, we label our work packages by Tender Batch (TB). Last December we signed Tender Batch 03 (TB03) for the construction of the Tokamak Complex and auxiliary buildings, one of our largest contracts in the area of the civil engineering works. In 2012 we also signed TB08 for site infrastructure works—together, TB03 and TB08 represent a value of EUR 350 million. Before summer time, F4E intends to sign for over EUR 500 million in contracts with the planned signature of TB02 (handling items, such as cranes, within the Tokamak Building), TB04 (mechanical and electrical installations), TB05 (the design and construction of the magnet power conversion and reactive power control buildings), TB07 (the design and construction of the cold basin and cooling towers, pumping stations and heat exchangers), and finally TB06 (external power supply equipment and installation). What it's important for you to know is that these contracts cover the entire "buildings scope" except for the Hot Cell Facility, radwaste building and three surrounding buildings. 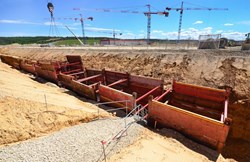 A lot has been accomplished in the last six months for the drainage networks on site: ten-metre-deep galleries were dug in different quadrants of the platform and hundreds of metres of concrete piping laid. It's time now for backfilling and levelling operations.
As you can see, we are making tremendous, behind-the-scenes progress. Each contract signature signifies that the tender design period is over and that the baton is being transferred to the contractors. But each signature is also an important and visible signal for the ITER Project of progress made in construction.


The contract for Tokamak Complex construction (and all surrounding buildings) was kicked off on 30 April 2013 in Barcelona (see related article in this issue). After an introduction by F4E Director Henrik Bindslev and ITER Director-General Osamu Motojima, all of us—F4E, ITER Organization and F4E's Architect/Engineer Engage—reminded the contractor consortium of the provisions of the contract and invited them to formally to start the works. The first phase of the contract will include the approval of quality documents, the selection of workers, and preparatory works (worksite, workshop, and welfare facilities). During the second phase of works, the consortium will deliver the detailed construction drawings. We are expecting construction works to begin early in 2014.


With all of the distinct work packages planned for building ITER, how will you manage the organization of the site in the years to come?


Most of the Tender Batches will be organized in separate areas on the platform and be managed in parallel. Where that is not the situation, as in the case of transversal packages TB06 (electrical distribution) and TB08 (roads and tunnels), each contractor will be responsible for the coordination of the work on its own area but general supervision and coordination will be closely followed by the following key actors: Apave, for health and safety coordination, and Engage, for the technical supervision.

The last segment of concrete for the Assembly Building basemat was poured on 21 May, wrapping up six months of pouring activity. The joints between segments will be completed by early June.
In 2014, F4E expects to have approximately 2,000 workers on the platform, all contracts combined. And from that moment forward, the construction site will be a hive of activity for years! On top of the challenge of keeping to schedule, we will pay very particular attention to health and safety. F4E will also be implicated in the overall organization and coordination of the construction site because—despite the general impression that the ITER site is very large—in actual fact we will see that, progressively, all pieces of available land will be used by the contractors. In this context, access control and space management will be key elements to be able to optimize the schedule.


The F4E building team, with the support of Apave, Energhia* and Engage, will represent a workforce of around 200 staff dedicated to the follow-up and the monitoring of something close to EUR 1 billion of investment on the ITER platform over the next five years.


* EnergHIA, which provides support to F4E, is a consortium that includes IDOM (Spain), Halcrow (UK) and Altran (Spain/France)