Share Tweet
Toroidal field coils: strand production passes 400 tonnes
Strand production has been building steadily since 2009 and has now topped 400 tons. Three of the eight suppliers that have been qualified to manufacture niobium-tin (Nb3Sn) strand for ITER are new to the worldwide market.
"Toroidal field strand procurement is going rather well," reports Arnaud Devred, who heads the Superconductor Systems & Auxiliaries Section at ITER. "We are on schedule."


That's more than 80,000 kilometres of strand—enough to go around the world twice at the Equator.


Worldwide capacity has had to ramp up significantly to meet the project's demand. There are eight qualified suppliers for ITER, including three that are new to the market (one in China, one in Korea and one in Russia). In 2011 and 2012, these eight suppliers, together, turned out over 100 tonnes annually.


"One hundred tonnes per annum represents a spectacular increase in the worldwide production of this multifilament wire which was estimated, before ITER production, at a maximum of 15 tonnes per year," says Devred. "As you would expect, the price has come down, and this 'surge' in production for ITER may well open up new markets."


Truly a worldwide collaboration: From cable produced in six Domestic Agencies and jacketed in five, toroidal field conductor will be shipped to coil manufacturers in Europe and Japan for winding.
Eighteen toroidal field coils will be produced for ITER plus a nineteenth (a spare). That's approximately 420 tonnes of strand, give or take a bit of spare material planned by each Domestic Agency. The production curve will begin to flatten in 2013 (see graph above) as contracts are brought to a close in several Domestic Agencies.


Devred estimates the market value of the toroidal field strand procurement at over EUR 200 million.


"It has been very satisfying to see this procurement unfold and to watch our international collaboration develop at every step in the process," says Devred. "In addition to the sheer scale of this procurement, what is also remarkable is the quality control and quality assurance that we have been able to set into place."


Four of the ITER suppliers are using a production technique called internal tin, while another four are using a bronze process. "It has been up to us to demonstrate that we can control both types of production within technical requirements," explains Devred, "We weren't sure of ourselves since this is the first time there has been such a large-scale production of internal tin. Test data shows that we can do it effectively." 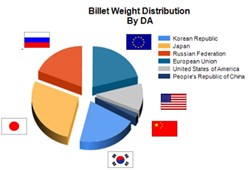 Billet registration in the Conductor Database in June 2013. From metal billets containing niobium filaments, a copper matrix and a tin source—typically bronze (copper-tin) or pure tin—manufacturers draw down strands of less than one millimetre in diameter.
Quality testing for ITER calls for statistical process control on critical parameters, systematic low-temperature measurements on strands, and regular low-temperature measurements on full-size conductors (25 percent of toroidal field conductor unit lengths are tested). This testing data is stored, like manufacturing data, in ITER's conductor database, which is currently fed by approximately 150 users, including suppliers and Domestic Agencies. Some 350,000 individual objects are stored in this web database—created to monitor the quality assurance/quality control processes of the conductor Procurement Arrangements.


Devred credits the "early days" with setting up the processes and systems that are proving to work today for conductor procurement: before the signature of the first ITER Procurement Arrangement, the specifications for ITER conductors were written by a committee made up of worldwide experts in large conductor procurement. Very tight quality control was developed that imposes many control points at each stage of fabrication verified by the Domestic Agencies and the ITER Organization. "I believe this will be the key to our final success," says Devred. "I am confident that what is coming off of the manufacturing lines is as good as can be made."


Read more on how strand is produced in Newsline 140.