The monster that pulled people out of their homes

It was around 10:00 p.m. when the convoy left its parking area in Berre—the monster had awakened and was ready to take to the road.
The passage of an exceptional convoy is a common sight for the inhabitants of the villages of Berre, Rognac, La Fare-les-Oliviers or Lambesc. The area, close to the harbour in Marseille, is heavily industrialized: steelworks, refineries, the aircraft industry ... all depend on the delivery and expedition of large-size loads that travel the roads to the general indifference of the local population.


It takes something really exceptional to pull people out of their homes, old and young alike, and bring them to the roadside to ogle and gawk.


On Monday night, 16 September, the 352-wheel, 800-tonne trailer mimicking an actual ITER convoy did just that. As it commenced its four-night journey between Berre and the ITER site in Saint Paul-lez-Durance, hundreds of people were lined up along the roads, some of them in nightshirts and pyjamas, to watch the long procession of men and vehicles slowly advance along the first stage of the 104-kilometre ITER Itinerary.


The event, which aims to monitor the behaviour of roads and bridges under the extreme ITER loads, was the culmination of five years of hard work and complex calculations by the French public roads administration and the technical services of the Bouches-du-Rhône département. As ITER Deputy Director-General Rem Haange explained prior to the departure of the convoy, "The ITER Itinerary is essential to the project. It is the indispensable link between component fabrication in the factories of the ITER Members and the assembly of the machine by the ITER Organization."


It was around 10:00 p.m. when the convoy, organized by logistics service provider DAHER, left its parking area in Berre. Night had fallen one hour earlier and the headlights of the trailer, accompanying vehicles and gendarmerie motorcycles contributed to the eerie atmosphere—the monster had awakened and was ready to take to the road. 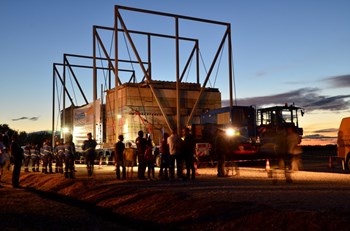 It takes something really exceptional to pull people out of their homes, old and young alike, and bring them to the roadside to ogle and gawk.
Its first stop, two hours and five kilometres later, was at the railroad bridge in Rognac, the first of the 35 bridges that dot the Itinerary. The bridge had been equipped with a whole array of sensors to measure the deflexion of the structure under the strain of the convoy. Calculations had anticipated some 32 mm of deflexion, measurements yielded 30 mm.


The test convoy will continue another three nights to the ITER site. As it progresses along the Itinerary, the measurement operations will be repeated at every bridge. Manoeuvring space and operational margins will also be checked at every turn and roundabout. Processing the accumulated data will take about one month and a half, but early on Tuesday morning, Pierre-Marie Delplanque, the man in charge of overseeing operations for Agence Iter France, was satisfied ... and relieved.


"We had a couple of very small issues," he said, "and in two or three places we can still make small improvements. However we did not identify any major obstacle and I do not anticipate any issue when the actual convoys are organized."


The convoy arrived in a secure zone in the village of Lambesc at 5:45 a.m. Tuesday, 16 September. Operations resume on Tuesday night at 9:30 p.m., when the convoy will take to the road again and—following the same pattern of measurements—will proceed another 15 to 20 kilometres.


The test convoy is expected to arrive at ITER in the wee hours of the morning on Friday 20 September.