There are several ways to answer this question. The simplest and most obvious (although a bit frustrating) would be to say that Nature herself invented fusion.


One hundred million years after the Big Bang, the first fusion reaction was produced in the ultra-dense and ultra-hot core of one the gigantic gaseous spheres that had formed from the primeval hydrogen clouds. Thus the first star was born, followed by billions of others in a process that continues to this day.


Fusion is the dominant state of matter in the observable Universe. In the solar system we inhabit for example, 99.86 percent of its total mass (the Sun) is in a state of fusion.


The shining of the Sun and the glittering of the stars were to remain an inexplicable wonder until the early years of the 20th century. In 1920, British astrophysicist Arthur Eddington (1882-1944) was the first to suggest that stars draw their apparent endless energy from the fusion of hydrogen into helium. Eddington's theory was first published in 1926—his Internal Constitution of the Stars laid the foundation of modern theoretical astrophysics.


It took another theoretician, an expert in the relatively new science of nuclear physics, to precisely identify the processes that Eddington had postulated. The "proton-proton chain" that Hans Bethe (1906-2005) described in 1939 gave one of the keys to the mystery. Bethe's work on stellar nucleosynthesis won him the Nobel Prize in Physics in 1967. 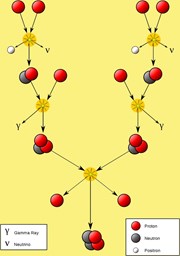 The ''proton-proton chain'' that Hans Bethe identified in 1939 is the complex and lengthy process that enables Sun-like stars to generate energy. In a fusion reactor, the deuterium-tritium reaction is much simpler but produces the same result: light atoms (hydrogen or its two heavy isotopes) fuse into heavier ones (helium), producing large amounts of energy in the process.
As Eddington, Bethe and others were watching the stars (a major discovery is rarely the work of a single individual), New Zealand-born physicist Ernest Rutherford (1871-1937) was exploring the intimate structure of the atom. The winner of the 1908 Nobel Prize in Chemistry, Rutherford understood what tremendous forces could be unleashed from the atom nucleus. In a famous 1934 experiment that opened the way to present-day fusion research, he realized the fusion of deuterium (a heavy isotope of hydrogen) into helium, observing that "an enormous effect was produced."


His assistant, Australian-born Mark Oliphant (1901-2000), played a key role in these early fusion experiments, discovering tritium, the second heavy isotope of hydrogen, and helium 3, the rare helium isotope that holds the promise of aneutronic fusion.


By the eve of World War II, the theoretical framework was established. Fundamental science still needed to be explored (and the exploration was to take much longer than expected) but fusion machines were already on the drawing board.


Although the first patent for a "fusion reactor" was filed in 1946 in the UK (Thomson et Blackman), it is only in 1951 that fusion research began in earnest. Following a claim by Argentina—later proven a prank—that its scientists had achieved "controlled thermonuclear fusion," the US, soon followed by Russia, the UK, France, Japan and others, scrambled to develop a device of their own.


In May 1951, a mere two months after Argentina's false claim, American astrophysicist Lyman Spitzer (1914-1997) proposed the "stellarator" concept that was to dominate fusion research throughout the 1950s and 1960s until it was dethroned by the more efficient tokamak concept born in the USSR.


The rest is history as we know it: less than one century after Eddington's theoretical breakthrough, ITER is being built to demonstrate that the power of the Sun and stars can be harnessed in a man-made machine.