Partager Tweeter
Vacuum vessel welding | Rehearsing a grand production
There is a place near Santander, Spain, where one can actually feel what ITER will be like. Although we've seen dozens of drawings and 3D animations, the encounter with a true-size mockup of the ITER vacuum vessel comes as a shock—ITER will indeed be an awesome machine. 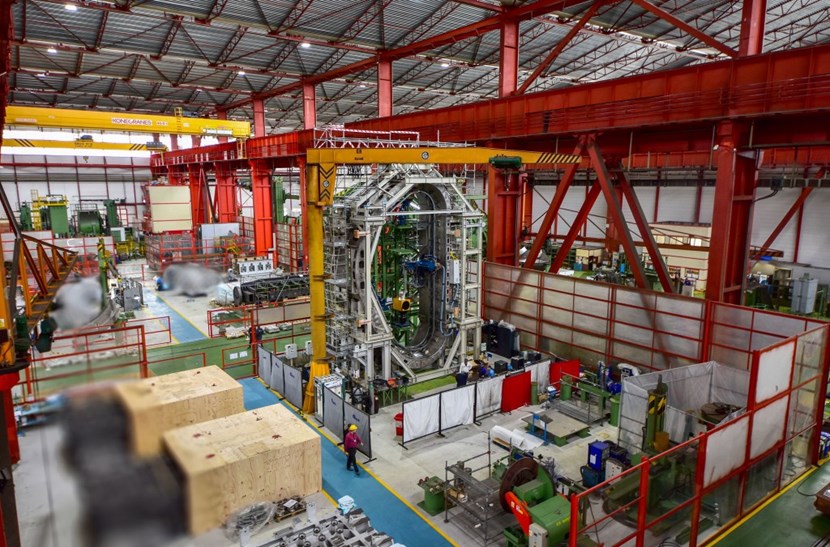 Splice plate insertion, welding procedures, the smoothing of the welds by a dedicated machine are part of the different acts that are being rehearsed on the real-size mockup at ENSA's Special Projects workshop in the outskirts of Santander, Spain.
Standing as tall as a six-storey building in a large workshop in the outskirts of the city, the massive and complex structure bears no resemblance to anything known. It could be a section of Jules Verne's Nautilus or the slice of an alien spaceship.


Although it represents only a portion of the tokamak's doughnut-shaped vacuum vessel, the mockup of two paired sectors seems to dwarf everything around it. With the exception of sector width (10 degrees versus 40 degrees) it mirrors the future reality of ITER down to the smallest detail.


On this huge stage, a one-of-a kind dress rehearsal is underway. The ITER Organization wrote the script; the Spanish company Equipos Nucleares SA (ENSA) provided the stage and the props. The main act is the story of the welding of the ITER vacuum vessel and ports—one of the longest and most complex sequences of the machine assembly phase, requiring around 200 personnel and at least four years to complete.


The ITER vacuum vessel is made of 9 sectors, each weighing around 420 tonnes and measuring 13 metres in height and 7 metres in width. On arrival at ITER, each sector will be suspended by one of the sector sub-assembly tools to be pre-assembled with two toroidal field coils and panels of vacuum vessel thermal shield. The resulting 1,200-tonne "sector module assembly" will be lowered by overhead crane into the Tokamak pit.


The pit will be a very crowded place by then, with the base and lower cylinder of the cryostat as well as two out of six poloidal field coils already in position (see an animation of the assembly sequences here). 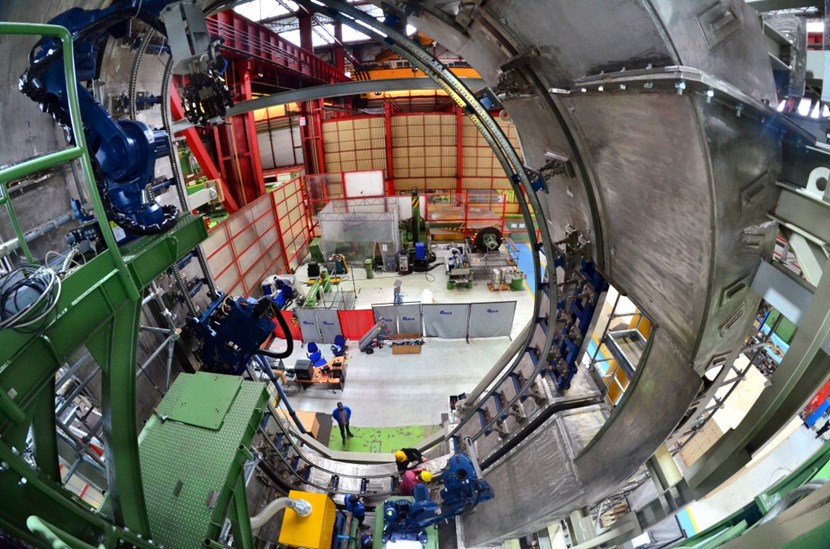 An inside view of the mockup: to the right, a welding robot sits on its support as the weld cap machining tool slowly creeps along the railing, smoothing the weld surface as it moves. A second robot is visible at the bottom of the image (centre), its welding head reaching deep into the gap between the two sectors.
The welding of the vacuum vessel sectors will have to be performed in a very restricted space, with tools operating from the inside the sector only. No access to the outer shell of the vacuum vessel sectors will be possible due to the thermal shield panels surrounding each sector.


These challenging in-pit welding operations are precisely what is being rehearsed on the ENSA mockup in Santander.


The mockup represents the joint between two sectors of the double-walled vacuum vessel, faithfully reproducing the 100-millimetre gap between the outer shells of two adjoining sectors and the larger inner-shell gap (160 mm) that permits a little extra leeway in the case of possible misalignment while allowing the welding tools to reach from the inside through to the outer edge of the component. 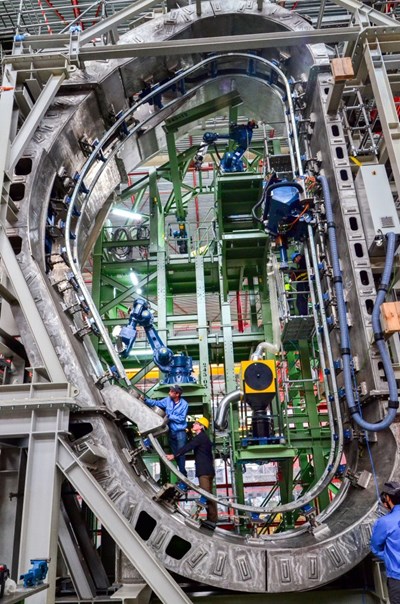 A D-shaped vessel to host a D-shaped plasma. Standing at the bottom of the structure, Brian Macklin and an ENSA engineer give us a sense of scale.
Welding filler material alone is not sufficient for filling the gaps, however. Before welding operations can commence, the spaces are closed off by 60-millimetre-thick bands of steel called "splice plates" that will be positioned, one after the other, by a special tool developed by ENSA.


Fifteen inner and 16 outer plates need to be inserted into the gaps between sectors. "We will manufacture them roughly, with extra width, thickness and length, and then reverse-engineer them by precise custom machining to the exact dimensions of the gap," explains Brian Macklin, project manager in the Tokamak Assembly Division and the original responsible officer for the ENSA contract.


Using an ultra-precise laser survey (see video here), each gap will be mapped and rendered as a 3D drawing. The data will then be fed to a high-precision tool that will machine the final plates to the exact dimension and topography of the gap. With the plates in place, the distance between the sectors will be reduced to half a millimetre.


Three large welding robots will then enter the scene, introducing welding heads into the gaps at different locations around the vessel; by operating them simultaneously, the shrinkage caused by the welding process is distributed all around the D-shaped section of the sectors.


"We have now reached the final stage of tool and procedure qualification on the mockup," explains Frantz de la Burgade, ITER group leader for sector assembly and the current responsible officer for the ENSA contract. "Half of the splice plates have been fully welded on the outer shell of the sector and the smoothing of the welds by a weld cap machining tool is ongoing. There are still a few parameters to streamline, such as assessing the importance of the weld shrinkage or detailing a few remaining interfaces with the vessel for the real work."


Amidst the din of ENSA's Special Projects' workshop, Brian Macklin, Frantz de la Burgade and Alex Martin, the ITER group leader for vacuum vessel engineering, observe, question, discuss, and take notes and measurements. Like directors on a set, they make certain that the acts are in conformity with the scripts. The dress rehearsal is now almost over; the actual production should premiere at ITER in the autumn of 2020.


Watch a video of what's happening "Inside the Big D."
More technical information can be found in the image gallery below.