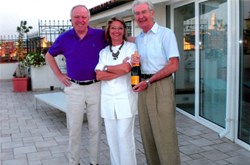 Sharing a joyful moment: Rem Haange (left) with Roberta and Pier Luigi Mondino.
Pier Luigi Mondino, friend and colleague to many within the international fusion community, passed away after a long illness. Pier Luigi started his scientific career as a lecturer at the University of Padua (Italy) and became full professor in 1981. Electrical machinery was his first field of research followed by plasma physics. In Padua he collaborated on the design and construction of a theta pinch and a reversed-field pinch experiment (ETA-BETA). He joined the JET Design Team in Culham (UK) in 1976 to design the neutral beam injector power supplies and in 1978 to design the ohmic heating circuit.


"When he joined JET in 1976, Pier Luigi became a member of my Power Supply Group during the design phase," senior fusion scientist Enzo Bertolini recalls. "Pier Luigi has been, since the beginning, one of my closest collaborators and I have very much appreciated and enjoyed his high technical skills and his dedication to our work. But Pier Luigi was more than that for me. Working very closely together we became dear friends, and this friendship extended to our wives and families. In 1993 he left JET to become a division head at ITER, then engaged with the machine's conceptual design. But our collaboration did not come to an end as—with the staff of my division at JET—we had many opportunities to collaborate with Pier Luigi's area of expertise."


In 1993, Pier Luigi joined the ITER team in Naka (Japan) to lead the Plasma and Field Control Division during the conceptual design phase. Back to Europe in 2002, Pier Luigi joined the EFDA Team in Garching (Germany) where he continued to work as project leader for the ITER power supplies and additional heating systems until his retirement in 2006. During his time with the EFDA team, Pier Luigi was the driving force behind the start of the activities for the establishment of the ITER Neutral Beam Test Facility (NBTF).


"The NBTF international agreements were signed in Cadarache on 12 December this year and it is very sad that Pier Luigi will not be with us at the laying of the NBTF cornerstone," says Tullio Bonicelli, a long-time companion now with the European Domestic Agency for ITER Fusion for Energy. "Pier Luigi was an outstanding engineer, who combined wide technical knowledge with excellent managerial skills. Those of us who had the opportunity to work with him will always remember the richness of discussions with him, his politeness and patience, and his continuous will to move things forward. He will be missed sorely."


Rem Haange, ITER Deputy Director-General, was a colleague of Pier Luigi at JET and in Naka. "At JET I did not have much contact with him as he was a group leader in the Power Supplies Division and I was mainly responsible for mechanical systems. However, at Naka, where we were a much smaller community, I got to know and like Pier Luigi very much. He was in charge of the Power Supplies Division. His division established and documented the initial design of the steady state as well as the pulsating power supplies and the plasma control systems for ITER. Many of the engineers from his Naka division work now in the ITER Organization, F4E or other Domestic Agencies.


On a personal basis, Pier Luigi was always very polite and helpful. Pier Luigi and his wife Roberta were very much liked in our small Naka community. After returning to Europe to work for EFDA on neutral beam systems for ITER he retired to Padua. Unfortunately his retirement was marred by his continual battle against cancer."