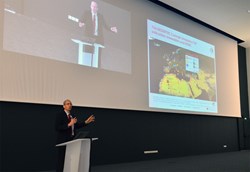 Oliver Steinmetz launches the first Inside ITER lecture in the new amphitheatre with a presentation on the Desertec initiative.
It all started on Lake Geneva with a promise. During the dinner cruise marking the grand finale of this year's Energy Security Congress, representatives of the ITER Project and the solar energy project Desertec shared a table. Two ambitious endeavours set up to secure the world's future energy supply through the power of the sun—one, by mimicking the process that powers the sun and other stars; the other by generating electricity from sun-drenched desert regions.


By the end of the evening, Oliver Steinmetz, one of the co-founders of Desertec who had (together with some 25 like-minded citizens) committed considerable private funds to start the Desertec Foundation, promised that one day he would come to Cadarache to see the ITER Project with his own eyes.


And so he did last week. After a crash course in fusion and ITER followed by a tour of the construction site, Oliver Steinmetz gave the first Inside ITER seminar in the new ITER amphitheatre.


The Desertec Foundation is an international non-profit collaboration of scientists, concerned individuals, and alternative-energy companies that believe that a combination of solar power from the world's deserts and othwer renewable power sources can provide all the electricity humanity needs. The idea is driven by a simple equation: Within six hours, the world's deserts receive more energy from the Sun that humankind consumes within one year. 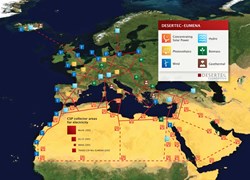 This is the idea: the EU-MENA Supergrid. Souce: Desertec
"In order to meet today's global power demand (18,000 TWh/year), it would suffice to equip about three thousandths of the world's deserts with solar collectors," Steinmetz maintains. That's about 130,000 square kilometres of desert, shown as a small red square on Desertec's map of the Sahara desert—the same red square that has become the Desertec logo.


But the Sun's energy is not the only target of Desertec. Their concept calls for the utilization of all sorts of renewable energies wherever they are most abundant (e.g., coastal areas for wind).

The Desertec Founders have taken up a vision that was first described by the American inventor Frank Schuman. In 1913 Schuman had set up a solar-generating plant in Egypt at Maadi, today a suburb of Cairo. Backed by UK investors and interest from the British and German governments, Shuman had a grand plan: to build a series of giant solar plants in the Sahara to challenge the supremacy of King Coal. "You would only need 20,250 square miles in the Sahara in order to supply the whole world with energy," he calculated. "One thing I know for sure. If mankind does not learn how to harness the power of the sun, he will ultimately fall back into barbary." Well, mankind was not yet ready to be saved. The First World War put paid both to the Maadi plant, which was broken up for scrap metal to supply Britain's munitions industry, and the Sahara project. Shuman died in 1918 and, when vast and easily accessible oil deposits were discovered in Iraq and Iran after the war, his dream of cheap, clean solar power was buried with him.
Source: Jonathan Gornall, The National

Combined with sophisticated heat-storage technology, the power supplied by solar-thermal power plants can be made available day and night, complementing fluctuating renewable energy sources such as wind power and photovoltaics. A low-loss, high-voltage direct current transmission grid would connect—across great distances—the production location with the centres of consumption. These technologies are installed and running in the U.S., Spain, and China.


For the EU-MENA region (Europe-Middle East-North Africa), the Desertec concept assumes, given the political will, that by 2050 a substantial portion of the electricity needs of the local markets and around 17 percent of European energy needs could be covered by power stations in the desert. This would entail estimated investments on the order of EUR 400 billion. " This sounds like a lot, but that's roughly equivalent to Europe's annual oil import bill", the speaker stressed.


Before large-scale solar power plants and wind farms in North Africa and the Middle East with transmission grids reaching across to Europe become a reality, the political course needs to be set, and the first reference plants in the deserts initiated. This is why the Desertec Foundatio started its Industrial Initiative (Dii GmbH) in October 2009 in order to study and, where necessary create the framework conditions to enable international trading in climate-friendly electricity as well as suitable investment incentives. Among the 13 founding members were Deutsche Bank, Siemens, German energy giants RWE and EON, and the world's largest re-insurer, MunichRe.


The involvement of academic and research institutions in the EU-MENA region has since been promoted through the Desertec University Network (DUN) established in October 2010, which reunites universities and research facilities from Morocco, Algeria, Tunisia, Libya, Egypt and Jordan. Its aim: to contribute to the implementation of the Desertec concept.


At the end of his talk Oliver Steinmetz answered many questions on the maintenance of technology and the security of supply. "Delivering energy across borders—sometimes changing borders—is a matter of international cooperation and trust," he concluded. Words that were not unfamiliar to the assembled ITER staff ...


For more on the Desertec Foundation, see the project's FAQ section or download information material at http://www.desertec.org/en/concept/literature/