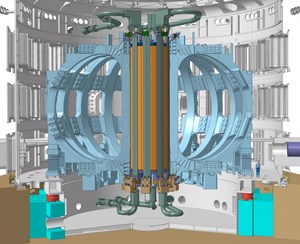 The central solenoid (in orange and green), the backbone of ITER's magnet system. Copyright: ITER Organization
After an intensive effort to improve the capability of ITER's central solenoid conductor, the ITER Organization has concluded that a technically reliable and economically viable solution has been found. This successful result was obtained through a concerted collaborative effort on the part of the ITER Organization, especially with the Domestic Agencies of Japan and the US, and the international superconductivity research community. The key element of the solution was designing the conductor using a "short twist pitch."  The Japanese strands using this technology confirmed the excellent results obtained during a preceding R&D phase and even enabled the qualification of two additional Japanese strand suppliers for the central solenoid conductor production.


The ITER central solenoid is one of the most challenging superconducting magnets ever designed. It is made up of a stack of six, independently powered coil modules. The coil stack has a total height of 13.5 metres and an outer diameter of 4.1 metres. One particularity of the central solenoid is that it will be used to inductively drive 30,000 plasma pulses of 15 MA with a burn duration of 400 s.


A cross section of ITER's solenoid Cable-in-Conduit-Conductor. Copyright: ITER Organization
Like all other ITER magnets, the central solenoid relies on a Cable-in-Conduit Conductor (CICC) made up of a rope-type cable that is inserted into a stainless steel conduit where a forced flow of supercritical helium circulates. For the central solenoid, the cable relies on 576 superconducting strands mixed with 288 pure copper strands and assembled in five stages around a central cooling spiral. The conduit has a circle-in-square shape and relies on a special high manganese austenitic steel with excellent low fatigue crack growth rate properties at cryogenic temperatures. To achieve the required high field, the superconducting strands are made out of a special alloy made of niobium and tin (Nb3Sn), a material with good current transport properties but that, once formed, becomes brittle and strain-sensitive and which must be handled with care.


The first performance qualification samples of ITER central solenoid conductors that were tested in the SULTAN facility in Villigen, Switzerland, exhibited excessive degradation as a function of electromagnetic and thermal cycling and did not meet the performance criteria under the SULTAN configuration, which is defined for stable operation of the central solenoid during the life cycle of the ITER machine.


Following these unexpected results, the ITER Organization in early 2010 launched a comprehensive R&D program, with the support of the US ITER Domestic Agency and Oxford Superconducting Technology (US), to investigate alternative conductor configurations that could potentially achieve more stable performances. This EUR 1.1 million program was successfully completed in May 2012 and a clear solution emerged: among the four variants that were tested, the conductor with the so-called "short twist pitch" configuration behaved as required.


In the "short-twist pitch" set-up, the strands are mechanically better supported and have little room for deleterious bending resulting in almost non-existing degradation as a function of electromagnetic and thermal cycling. The test results even show a slight increase in performance, likely due to compressive strain relaxations that may not be representative of in-coil operation.


The results of the R&D demonstrated that cycling degradation was not inherent to Nb3Sn CICCs and that a technical and economically viable solution could be found to this challenging issue. It remained for the Japanese manufacturers to demonstrate that the short twist pitch configuration could result in the same performance on their strands. In order to do so, the Japanese Atomic Energy Agency (JAEA) prepared a number of samples that were meant to match or even surpass the performances of the ITER Organization samples. The first of these samples (referred to as CSJA3) was tested in November-December 2012. The tests in SULTAN confirmed the excellent results obtained with the short twist pitch sequence, which demonstrated the best performance. It also enabled the qualification of two additional Japanese strand suppliers for central solenoid conductor production.


The story of central solenoid conductor development is a good example of how scientific collaboration across many borders can lead to solutions for even the most extraordinary challenges of building the ITER machine—a device that pushes most technologies to their limits and calls for innovative solutions.


Special thanks to Arnaud Devred, ITER Superconductor Section Leader, for his contribution to this article.