Ultra-compact, but just right for the job 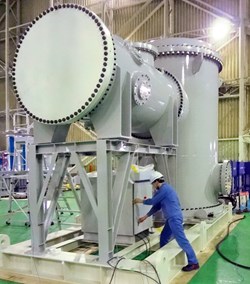 
The ITER neutral beam injection system—the power horse of ITER heating systems—will be tested at full-scale at the PRIMA neutral beam test facility in Italy (the MITICA experiment) before being installed on ITER. The system combines a 1 MV power supply for negative ion acceleration and a transmission system (supplied by the Japanese Domestic Agency) with a negative ion source power supply provided by the European Domestic Agency to generate a 1 MeV high-energy ion beam.


The 1 MV ultra-high voltage power supply system is over 80 metres long. In the past, voltage holding tests of equipment exceeding 1 MV were generally conducted indoors in a climate-controlled building, with a separate test for each component. Furthermore, to insulate such high voltage, an insulation distance of 10 metres or more was respected between the equipment and the building, meaning that a large-scale indoor facility, with dozens of metres of margin in all directions, was needed for tests on even one piece of equipment.


ITER requirements, however, dictate that all the components of the neutral beam injection power supply system must be tested at once, with a testing power supply that is one-tenth the size of conventional power supplies.


To reduce the footprint of the system, Japanese engineers reduced the distance required for insulation by housing the testing power supply inside of a pressurized vessel filled with insulating gas. By connecting the pressure vessel directly to the neutral beam injection power supply system, the vessel is isolated from the exterior and protected from dust and moisture. An insulating gas—with voltage resistance properties in line with the design and able to withstand the 1 MV insulation with a high degree of reliability—was sought, system specifications were defined, and configuration and layout were decided.


With these important parameters, the Japanese Domestic Agency and its supplier were finally able to design and fabricate this new ultra-compact testing power supply. The testing power supply complies with the European Pressure Equipment Directive, and is the first component supplied by Japan to have passed these rigorous standards.


After factory voltage holding tests are conducted for each component of a 1 MV power supply system in Japan, the testing power supply will make its way to the PRIMA facility in 2016 and be ready to collectively test the neutral beam injection power supplies on the ITER construction site starting from February 2017.