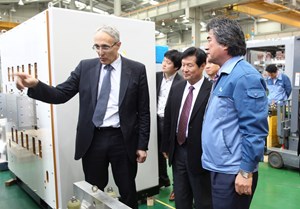 ''Meeting the industrial suppliers was an excellent opportunity to verify the manufacturing status of procurement items in the field and to see, first hand, the technological competitiveness of Korean enterprises that are procuring items for ITER,'' said Director-General Bigot, seen here at the Dawonsys plant.
ITER Director-General Bernard Bigot recently spent a full four days in Korea, where he discussed project status with the Korean Domestic Agency, met industrial suppliers, and held a bilateral meeting with government representative Minister Choi Yang-hee of the Ministry of Science, ICT and Future Planning (MSIP).


On 13 April, the Director-General visited Korea's National Fusion Research Institute (NFRI) and celebrated the extension of the Memorandum of Understanding for technical cooperation between NFRI and the ITER Organization. His visit was also the occasion to conclude an agreement on the procurement of Test Blanket System connection pipes—these pipes, which are part of the Members' Test Blanket Systems, will be procured in group by ITER Organization as a cost-saving measure.


Director-General Bigot visited the KSTAR tokamak facility for the first time in the company of Yang Hyung-yeol, head of the Advanced Engineering Research Department. "I am very impressed to be here," the Director-General said during the tour. "KSTAR has been addressing many nuclear fusion issues that are important to ITER. Therefore, I would like to ask all of you to carry out your given missions faithfully."

ITER Korea recently held its 2015 kick-off meeting, with the attendance of the fusion R&D support team from MSIP, and confirmed the work plan for the year.
He also met with Korean industrial suppliers Hyundai Heavy industry (vacuum vessel) and SFA Engineering (assembly tooling, thermal shield), and had the chance to visit Dawonsys (AC/DC converters) and KEPCO E&C (engineering support). "Meeting the industrial suppliers was an excellent opportunity to verify the manufacturing status of procurement items in the field and to see, first hand, the technological competitiveness of Korean enterprises that are procuring items for ITER."


In his meeting with Minister Choi, Director-General Bigot expressed his appreciation for Korea's strong participation in ITER and asked for the government's continued interest and cooperation. Minister Choi re-confirmed his support for the project and his confidence in the strong leadership that has been put in place.