La Ciotat, the cradle of cinema 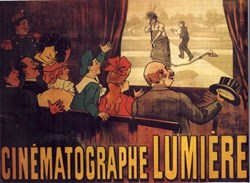 In La Ciotat, in the summer of 1895, the Lumière brothers organized the first-ever public projection of moving pictures to an audience. 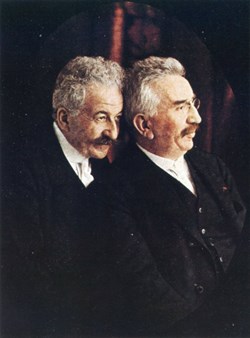 Auguste and Louis Lumière also patented one of the finest colour photography processes called the ''Autochrome Lumière.''
For two weeks in May the resort town of Cannes, on the French Riviera, is synonymous with cinema. The International Film Festival was established there in 1939 but the outbreak of World War II postponed its first edition to 1946. For the past 64 years, Cannes' Golden Palm has been one of the most coveted prizes in the film industry.


Not as famous and considerably less glamorous than Cannes, another seaside town in Provence is also closely linked to the history of cinema. Thirty kilometres east of Marseille, the small town of La Ciotat, former home to one of France's largest shipyards, is considered here to be the cradle of the cinématographe—the motion picture camera and projector that the Lumière brothers invented at the end of the 19th century.


The invention of the "moving images" is claimed by many, but Auguste (1862-1954) and Louis (1864-1948) Lumière, whose father ran a photographic firm in Lyon, were the first to patent such significant items and processes as the portable motion-picture camera, film perforation, a film processing unit and the movie projector.


The Lumière family owned a vacation home in La Ciotat where several of their experimental films were shot. In the summer of 1895, they organized the first-ever public projection of moving pictures to an audience, featuring a piece called "Arrival of a train at La Ciotat station" and a second called the "Sprinkler sprinkled", a 49-second piece considered to be the primitive forerunner of all subsequent slapstick comedies.


The showing at the local theatre in La Ciotat was a huge success. It led Auguste and Louis to organize similar events in Paris, this time charging the public for admission. The following year, the Lumière brothers embarked on a world tour to present their cinématographe in London, New York and Buenos Aires.


Whether the Lumière brothers actually "invented" cinema can be disputed. What is certain is that they were the first to understand, and actually experiment, the potential of "moving images" as a medium of mass entertainment.