How the "Zeta fiasco" pulled fusion out of secrecy

Share Tweet
Sixty years ago | How the "Zeta fiasco" pulled fusion out of secrecy
In those days—the late 1950s—pinch machines ruled the world of fusion. Although tokamaks were already under development in the Soviet Union, it would be more than a decade before they became the dominant form of fusion device. 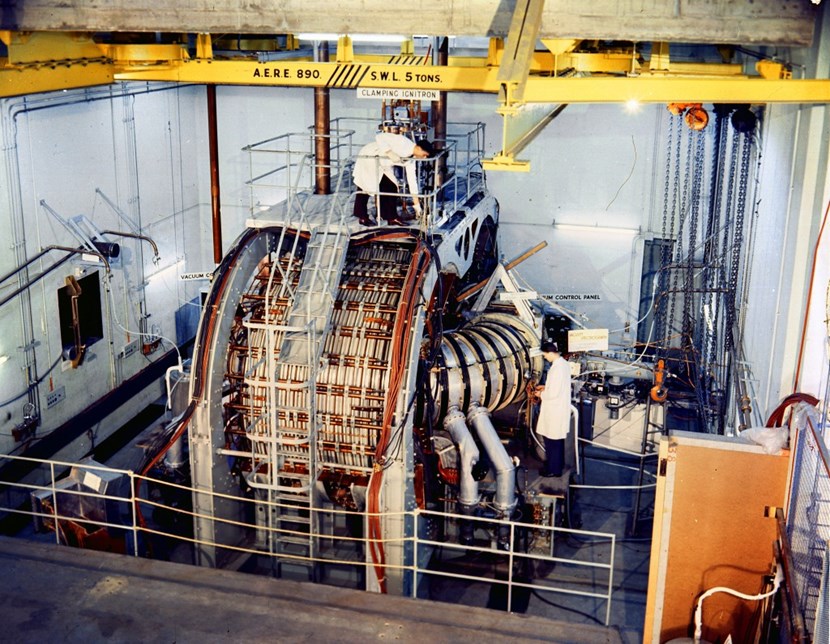 A ''circular pinch'' machine, Zeta operated at Harwell (UK) between 1957 and 1968. At the time of its construction, it was by far the largest and most powerful fusion device in the world.
In the West, scientists were founding their expectations on machines such as the Perhapstron in the US or Zeta (Zero Energy Thermonuclear Assembly) in the United-Kingdom—machines that used strong magnetic fields to compress ("pinch") the plasma and, hopefully, produce fusion reactions.


Fusion research at the time was mostly national, classified and competitive. Although scientists throughout the world were eager to engage in international collaboration (as Igor Kurchatov's 1956 visit to Harwell, the Holy of Holies of Britain's nuclear research, had demonstrated), governments were reticent to open their labs and facilities.


The "Zeta fiasco," as it came to be known, was to throw into stark relief the need to pull fusion research out of secrecy.


The Zeta fiasco began with a triumphant claim and ended in utter embarrassment. What happened sixty years ago this week, at the end of January 1958, was a blow to fusion research and yet at the same time a first step towards its refoundation.


Zeta entered operation in July 1957. Its first results were highly encouraging: in previous machines plasmas had rarely lasted more than a few microseconds; in Zeta they passed the millisecond mark—a full three orders of magnitude jump and a remarkable achievement.


By August, the machine's operators had switched from hydrogen to deuterium, increasing current to 200,000 amps. Suddenly, on the evening of the 30th—bingo!  Zillions of neutrons began flooding out of the five-million-degree plasma. 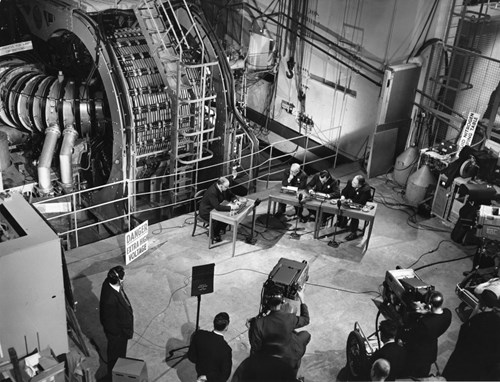 Although Zeta's experiments were covered in secrecy, the news that neutron production had been observed—likely from fusion reactions—was too good to be contained. On 24 January 1958, a press conference was organized in Zeta's main hall. Four hundred media representatives attended.
Zeta's experiments were still secret. But the news was too good to be contained and leaks began appearing in the press. In November, a spokesman from the United Kingdom Atomic Energy Authority (UKAEA) hinted that "fusion energy [had] been achieved" and, by January, the UK government decided that it was time for a full-blown press conference.


Nobel Prize winner John Cockcroft, who headed British nuclear research and was responsible for the Zeta program, opened the conference with a cautiously worded statement: "Neutrons have been observed in about the numbers to be expected if thermonuclear reactions were proceeding," he said. However, "in no case have the neutrons been definitely proved to be due to the random motion of the deuterium associated with a temperature on the order of five million degrees ..."


Was it indeed thermonuclear fusion, or not? Had Zeta harnessed the power of the Sun? Had the UK beaten the rest of the world in the quest for unlimited energy? At Harwell, 400 howling reporters demanded to know for sure.


Pressed with questions Cockcroft eventually said that he was "90 percent certain" that Zeta's neutrons came from fusion reactions. The media needed nothing more—and the presses started rolling.


"A Sun of our own!" trumpeted the London Daily Sketch the following morning. "Unlimited fuel for millions of years," echoed the Daily Mail. Cockcroft presented what the UK scientists had achieved as "a greater achievement than Sputnik," (the artificial satellite that the USSR had launched a few months before). The world was enthralled. For the French daily Le Monde Zeta—dubbed "the magic tube"—marked the "first step in harnessing thermonuclear energy." 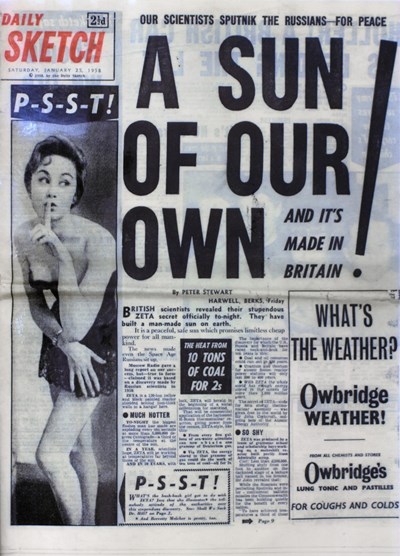 In the wake of the Zeta announcement in late January 1958, national pride in the UK led to the creation of a neologism: UK scientists had ''sputniked'' the Russians! The pin-up on the front page hinted at the ''tell-nobody attitude over this stupendous discovery.''
The press conference at Harwell had been timed to coincide with the publication of a Nature article, which also included results (although not as spectacular as Zeta's) from the Los Alamos Perhapstron and Columbus machines. Included in the coverage, but largely unnoticed by the general media, was a note by Lyman Spitzer, the father of fusion research in the US.


Spitzer, an astrophysicist who had invented the concept of magnetic confinement and had built the first fusion machine in 1951, was highly skeptical of Zeta's results. There was a contradiction, he wrote, between the predictions of theory and the numbers reported, that suggested that "some unknown mechanism would appear to be involved." Fusion could not happen at 5 million degrees.


Others, like Lev Artsimovitch in Moscow, were more brutal in their refutation. As increasingly detailed analyses sowed more and more doubt, the Zeta triumph turned into an embarrassment.


Less than four months after the January 1958 news conference, "the H-men from Harwell"—as newspapers called the Zeta team—had to issue a corrective news release, acknowledging that the neutrons they had observed had nothing to do with the fusion of deuterium nuclei, but rather owed their existence to complex phenomena originating in plasma instabilities.


The Zeta affair dealt a severe blow to the credibility of fusion research; too many expectations and too much excitement had resulted in a huge disappointment. But there were precious lessons to be learned. One of the most important was that fusion research was doomed if it was to be pursued in the secrecy of national laboratories. Peer review, the sharing of information and doubts, and a common analysis of failures or potential successes were essential not only to the credibility of fusion research but also to its success.


One month later in Geneva, the "Second United Nations International Conference on the Peaceful Uses of Atomic Energy" (Atoms for Peace) opened the door to such collaboration. And ten years later at the Novosibirsk fusion conference, when Lev Artsimovitch presented the exceptional results obtained in the soviet T-3 and TM-3 tokamaks (a 20-millisecond plasma at a temperature of 10 million degrees) it was a British team that was invited to do the checking and that eventually confirmed the breakthrough.


As for Zeta—for some time, the largest fusion machine in operation—it went on to have a very productive career in plasma studies. But its species belonged to an evolutionary dead end. By the late 1960s the time of the tokamak had come.