The year of the gyrotron

Share Tweet
ITER technology | The year of the gyrotron
The first energy-generating devices of ITER's electron cyclotron resonance heating system will be finalized in 2018 after a multi-decade development program. 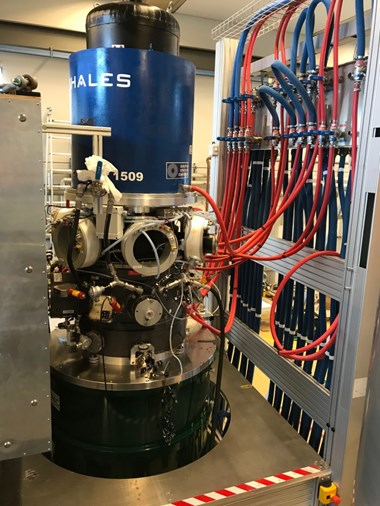 Part of the European gyrotron program, this 1 MW prototype is under development for the second plasma phase at ITER, where the full 20MW of injected power is required. For First Plasma in 2025, installed electron cyclotron capacity will include eight gyrotrons (four from Japan and four from Russia) and 4 sets of high-voltage power supplies (two from Europe and two from India).
Back in early 1990s, few were convinced that electron cyclotron resonance heating (ECRH) could fit the bill when it came to achieving the high-power, high-frequency parameters required for ITER plasma heating. In fact Mark Henderson specifically remembers his thesis advisor warning him to "go into any field but that one."
But technological breakthroughs on a number of key components of the gyrotron—the microwave-generating device at the core of the ECRH system—have led to steadily increasing performance and, today, in addition to being one of three external heating systems on ITER, ECRH is considered as one of the more viable candidates for the mix of external heating techniques under consideration for the larger, more powerful fusion reactors planned next.
"From performance measured in kilowatts in the early years of development, we now have devices routinely operating at 1 MW (one million watts) for periods of 1000 seconds," says Henderson, who leads the Electron Cyclotron Section at ITER. "This development has largely been driven by the needs of the fusion community, although gyrotrons also have applications as heating devices in industry or as microwave sources in spectroscopy and diagnostics."
ITER will rely on the ECRH system to initiate each plasma shot, contribute 20 MW of heating power to the plasma, and suppress certain types of plasma instabilities.
Within the long-pulse, continuous wave gyrotrons under development for ITER, a beam of electrons is generated and accelerated toward a large cavity. A strong field produced by a magnet outside of the cavity modifies the circular movement of the electrons, resulting in high-frequency waves that act like a laser beam and that can then be guided, using mirrors, to specific areas of the ITER plasma.
From the Radio Frequency Building where they are generated, the microwave beams will journey about 160 metres along waveguides to launchers at the equatorial and upper levels of the vacuum vessel. Electron cyclotron heating at ITER will require 12 sets of high-voltage power supplies, 24 gyrotrons, 24 transmission lines, and 5 launchers. 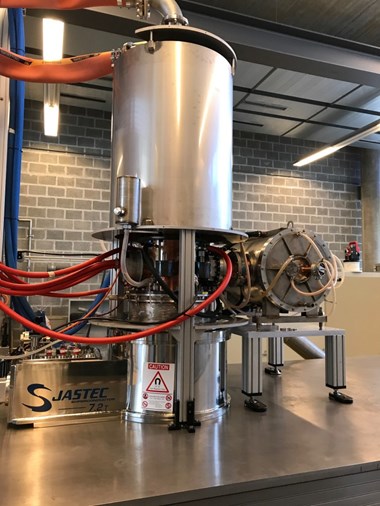 This Russian-manufactured unit is installed at the gyrotron test bench of the Swiss Plasma Center. Equivalent to the gyrotrons manufactured in Russia for ITER, the production module was purchased by Europe to test upper launcher components and is available to other ITER partners for testing waveguide components. Note the superconducting magnet at the base of the gyrotron (manufactured by Jastec) and the large collector at the top (surrounded by lead to shield against X-rays).
"The power and frequency requirements for ITER (1 MW at 170 GHz) were determined in the late 1990s," recalls Henderson, "however the difference of scale meant that we were dealing with all new technology. In the years since, the electron cyclotron community has established the physics basis, completely redesigned the launcher, developed high-precision waveguides for low-loss transmission, and pushed the performance of a number of key gyrotron components such as artificial diamond windows."
In this period of "finding what works and what doesn't," researchers in Europe, Japan, Russia, and the United States were all closely involved—the same Members (plus India) that are today procuring the electron cyclotron system for ITER*. Beginning in 2012 the first Procurement Arrangements were signed, followed by lengthy prototyping, review and test phases.
The first gyrotron units have now been completed in Japan and Russia and final testing is underway. By end-2018 factory acceptance tests will have concluded on two gyrotron units in Japan, two units in Russia, and power supplies in Europe. Installation activities are planned to start in 2020 for the eight gyrotron units needed for ITER's First Plasma; (16 others units will be installed at a later assembly phase).
"The electron cyclotron system will be coupled with the other heating systems in ITER—neutral beam injection and ion cyclotron—to provide a 'heating service' to the plasma," concludes Henderson. "Each has its functionalities and advantages that have been maximized through engineering to get the best performance we can. Soon, experimentation will show us what combination will be best for plasma performance in future devices."
* Five ITER Members are participating in the procurement of the electron cyclotron system at ITER: Europe (6 gyrotrons, 12 power supplies, 4 upper launchers), India (2 gyrotrons, 4 power supplies), Japan (8 gyrotrons, 1 equatorial launcher), Russia (8 gyrotrons), and the United States (all transmission lines).

This first Russian gyrotron unit is one of two undergoing factory acceptance testing at GYCOM, in Nizhny Novgorod. After the tests conclude in 2018, the units will be stored until the Radio Frequency Building is ready to receive them.

Testing to be completed in 2018

The Japanese Domestic Agency will supply a total of eight gyrotron units to ITER. Contractor Toshiba has manufactured the two first production units, which are undergoing testing now at The National Institutes for Quantum and Radiological Science and Technology (QST).

A blessing in Japan

Prior to starting the Toshiba gyrotron at QST, one scientist visited a local Shinto shrine to receive the blessing from the patron saint of radio frequency devices. The blessing is manifested in the above plaque that is kept near the gyrotron test stand at all times. (You can also see it in the preceding image if you look carefully.)

Here is a schematic drawing of a gyrotron device. A hot filament at the base of the unit emits electrons whose path is influenced by two factors—the difference of potential between the cathode (-55kV) and the anode (+35kV), and the superconducting magnet (SCM) that traps the electrons' oscillations along magnetic field lines up to the cavity region. The cavity dimensions and the electron beam diameter have been carefully controlled to produce a microwave beam resonating at 170 GHz. Fifty percent of the electrons' energy is converted into a microwave beam that is guided by mirrors to the gyrotron's diamond window, then into the waveguides, launchers, and ultimately, the plasma.