Share Tweet
Correction coils | Closing the case
Over the past six years, the Chinese institute responsible for the fabrication of ITER's 18 correction coils has successively qualified the winding, impregnation, case manufacturing and assembly steps. A final review carried out in August on the closure welding of the casing completes process qualification activities, allowing the first production coil to be finalized this year. 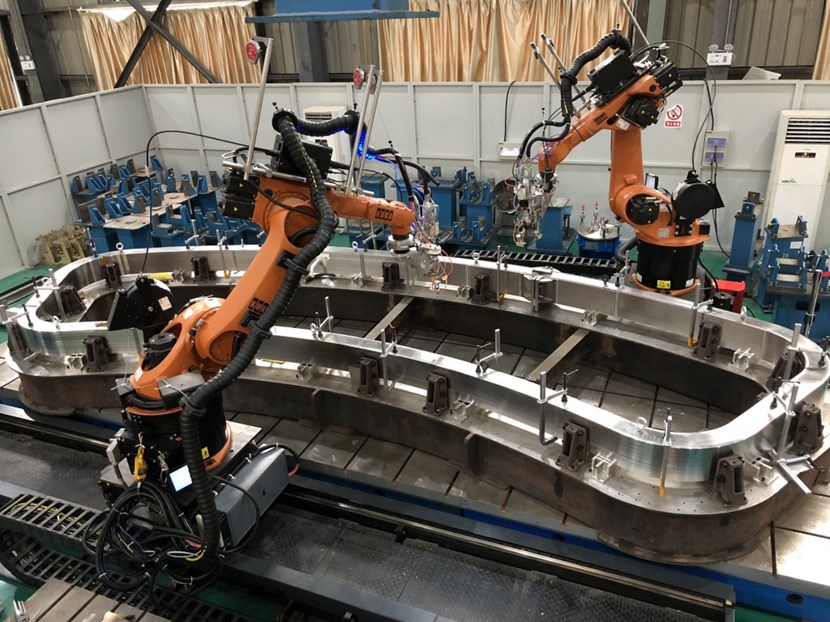 A high-power laser weld system has been specially developed by ASIPP contractors to seal the structural case of each correction coil.
In a spacious workshop at the Institute of Plasma Physics of the Chinese Academy of Sciences (ASIPP), sparks fly as a welding robot makes a pass along the top edge of a full-scale bottom correction coil prototype. Designed to negotiate the unusual shape of the correction coils—which are either banana-shaped (top and bottom coils) or non-planar squares (side coils)—the robot is using autogeneous laser welding to perform the last in a series of qualification activities: final closure welding.


"This last step is a delicate one," explains Fabrice Simon from ITER's Magnet Division. "At this point the superconducting winding pack has been inserted into its steel case and the top lid must be welded shut. The technical specifications demand gap tolerances of less than 0.3 mm, which means a tight tolerance machining of both case and lid over the total 30 metres of weld as well as the control of welding shrinkage. The ASIPP took up the challenge with enthusiasm, and developed a 'skip and balance' welding sequence that has proven successful, with the robots welding opposite corners, then opposite sides to balance the shrinkage effect." 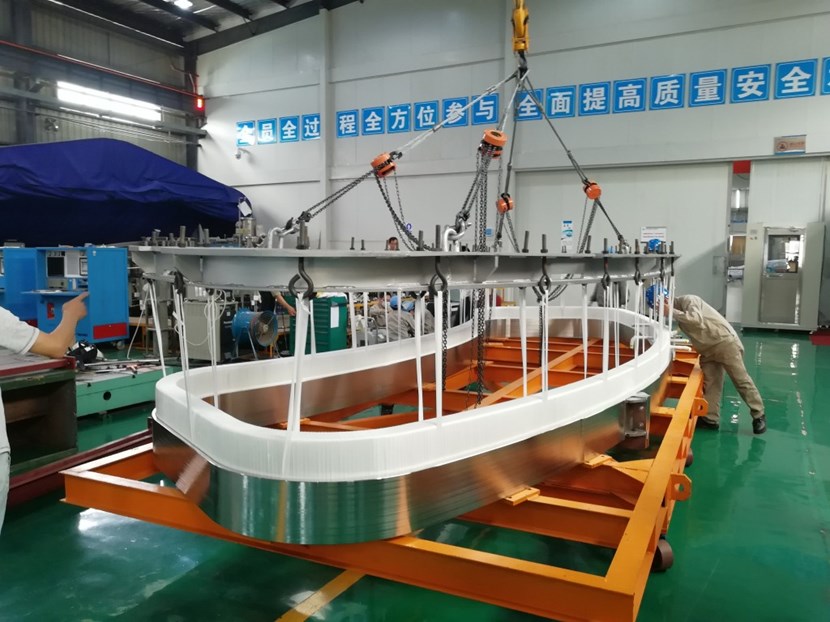 A ''dummy'' superconducting winding pack is inserted into a prototype steel case. The last qualification step—laser closure welding—was performed at ASIPP in June/July and the results were presented during a joint ITER Organization/Chinese Domestic Agency/ASIPP meeting at ITER Headquarters in August.
Two robots and powerful 20 kW laser weld tools have been engineered to work over the coils' large surfaces. It took one year to establish the best processes for case closure based on tests run to characterize the welds and ensure mechanical strain properties. The closure weld test on the full-scale prototype case, initiated in June, took approximately two months including inspection and dimensional checks. 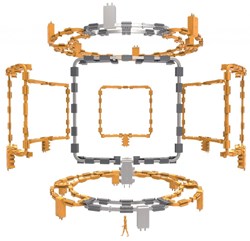 Six bottom coils, six side coils and six top coils will be installed around the Tokamak. Their role is to reduce magnetic error fields caused by imperfections in the position and geometry of the principal coils.
"Weld quality was better than expected and most dimensions met requirements," confirms both Wei Jing, project leader for ASIPP, and Dr Niu, from the Chinese Domestic Agency (ITER China). The ITER Organization, ITER China (responsible for the procurement of the coils), and manufacturer ASIPP discussed the detailed test results at a three-day meeting that took place last week at ITER Headquarters. Once all documents have been signed, the qualification phase for bottom and top correction coil manufacturing officially comes to an end and series production can continue full speed. The last challenge for ASIPP will be to qualify the case closure welding for the side corrections coils, which have bigger and more flexible structures than the bottom correction coils.


At ASIPP, production is underway on the six bottom correction coils—the first set needed for installation at ITER. Teams have completed five winding packs, carried out vacuum pressure impregnation on four, and produced the first case structure. Later this month, the insertion of the first impregnated winding pack into its case is scheduled, to be closely followed by closure welding.


By the end of the year, the first bottom correction coil, BCC #1, will be ready for cold testing.


Click for more information on the qualification of correction coil winding and coil case manufacturing.