The back side of the SPIDER acceleration system: the acceleration grid.
ITER will rely on two heating neutral beam injectors to deliver more than 50 percent of the external heating required by ITER. Although neutral beam injection is routinely used for plasma heating in fusion devices, the size of ITER imposes enhanced requirements: particle beams have to be much thicker, for example, and individual particles have to be much faster in order to travel far into the core of the plasma.


The challenging physics and technology issues will be investigated at the ITER Neutral Beam Test Facility in Padua, Italy, a facility hosted by the Italian research organization Consorzio RFX. The Domestic Agencies for Europe, Japan and India are all contributing components according to Procurement Arrangements signed with the ITER Organization; Italy is building the facility as a voluntary contribution to the neutral beam development program.


The components are the same as those that will be used on the heating neutral beams at ITER, which will allow the neutral beam teams to acquire valuable information about neutral beam manufacturability and operation.


In SPIDER, negative ions are generated in the plasma, which is powered by the injection of electromagnetic waves. Once generated, the plasma expands into the source volume and takes the only possible way out: the 1,280 openings of the so-called plasma grid. A potential difference between this grid and the next extraction grid (which has the same aperture pattern) provides the extraction of the negative charges from the neutral plasma; their acceleration at full energy (0.1 MeV in SPIDER) is provided by another potential difference, applied with respect to a third electrode: the acceleration grid.


SPIDER entered into operation in June 2018, and the team is now pursuing the optimization of negative particle extraction and the entry into operation of all systems.


The first phase of experimentation is focused on the plasma. So far, hydrogen plasmas have been sustained for hundreds of seconds; the response of the system to variations of injected power, magnetic field intensity and source filling pressure has been in accord with expectations based on similar test beds.


Together with the generation of hydrogen and deuterium plasmas, the NBTF team is beginning to study the process of separating out the negative particles, which occurs thanks to a difference in electrical potential applied at the level of the plasma and extraction grids. Specialized diagnostics will be used to confirm the success of this first phase before a third grid—the acceleration grid—enters into action to accelerate the negative ion beam.


Update on MITICA
A second test bed—the full scale neutral beam injector prototype MITICA—is under construction in parallel to SPIDER. The process behind the generation of the plasma in MITICA will be exactly the same as in SPIDER, but in MITICA the acceleration grid system will involve seven electrodes, up to a final energy of 1 MeV. Moreover, MITICA will demonstrate the conversion of the fast ions into neutrals and will validate the concept of the electrostatic residual ion dump, required to filter out the remaining charged particles from the neutral beam.


While the MITICA beam source—fruit of many years of research—is under construction now in Europe, power supply equipment from Europe and Japan is being delivered and installed at the Neutral Beam Test Facility. 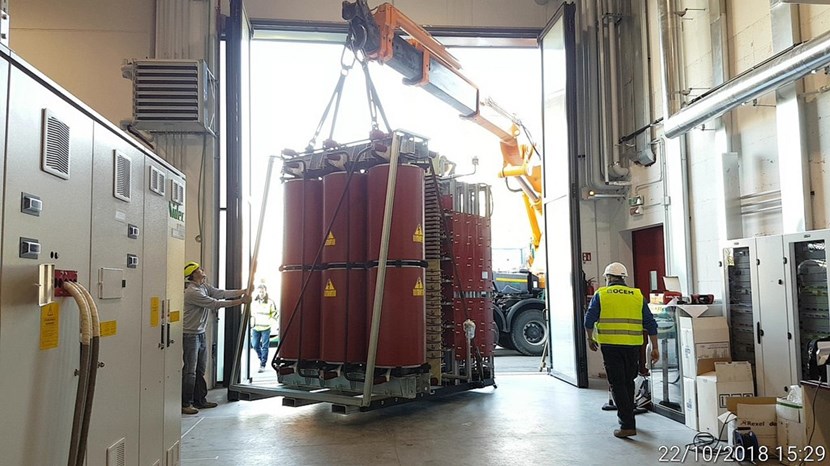 The power supply for the residual ion dump has been delivered to the MITICA test bed at Consorzio RFX in Padua, Italy. On the left, the conversion system for the test bed's acceleration grid power supplies is also visible.
Recently, the conversion system for the acceleration grid power supply completed site acceptance testing with excellent results. This equipment, manufactured by the Italian firm Nidec ASI, will convert AC power from the grid to the DC power required for the acceleration of the ion beam. Power supply equipment for the residual ion dump, whose role it is to "catch" any of the ions left after the negative ions have been neutralized for injection into the plasma, has also been delivered by OCEM ET (Italy).


With the delivery of the ion source and extraction power supply at the end of the year, Europe will have completed its contributions to MITICA's power supplies.


Read more on the Fusion for Energy website here.