Share Tweet
Toroidal field coils | First vertical insertion
Final assembly activities on the first toroidal field coil to be shipped to ITER are well underway in Japan. The insertion of the superconducting winding pack into its structural case was achieved in March through the successful collaboration of Mitsubishi Heavy Industries, Ltd. (MHI) and Mitsubishi Electric Corporation (MELCO). 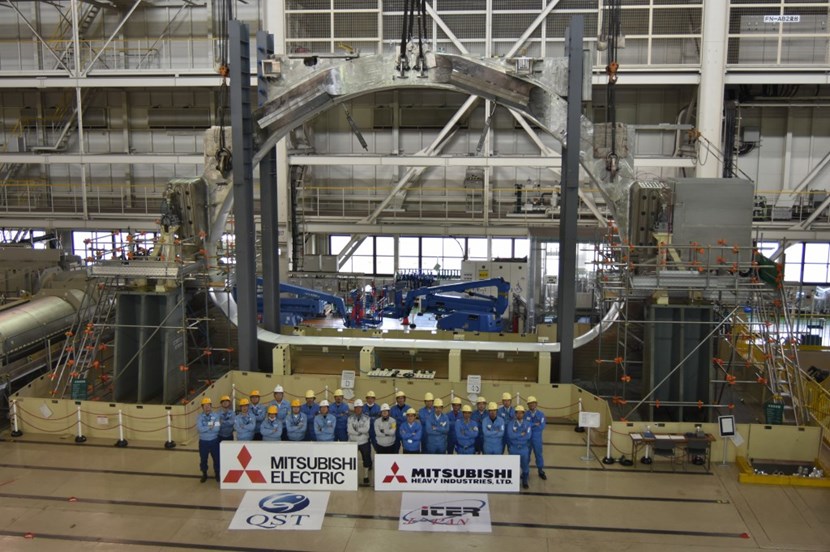 The structural case has been successfully paired with its superconducting winding pack. ITER Japan contractors carry out this operation vertically, and have developed an assembly platform and handling tools accordingly.
The National Institutes for Quantum and Radiological Science and Technology (QST*) is responsible for procuring 9 of ITER's 19 toroidal field coils. It has contracted with MHI and MELCO for five of the coils and with Toshiba Energy Systems & Solutions Corporation for four others.


Over two and a half weeks in March, MHI/MELCO successfully carried out the Japanese procurement program's first insertion operation—a highly delicate sequence of activities during which the 110-tonne D-shaped superconducting winding pack is inserted into its structural steel case.


At the start of the operation, case manufacturer MHI positioned one side of the steel casing—the 16-metre, linear inboard leg—on the platform facing up. MELCO (responsible for the fabrication of the superconducting magnet core) oversaw the lowering of the winding pack by crane, continually monitoring its position within the case leg by precision laser tracker over the hours-long operation. Fine adjustments were made to the position of the winding pack in order to reach required tolerances within an accuracy of 0.3 mm.


It was then MHI's turn to carefully lower the 130-tonne curved outboard leg over the vertical assembly. Four guide pillars installed on the sides of the winding pack prevented the component from causing damage as it descended to rest on four temporary supports. Equipped with 3D positioning adjustment capabilities, the supports allowed the outboard leg to be adjusted precisely to match the weld bevels of the inboard leg within tolerances of +/- 0.5 mm over a length of 16 metres.


Once matched, four welders worked simultaneously to balance welding shrinkage and maintain any deformation to less than 3 mm as they welded the two halves of the coil case together. The precision laser tracker was called into action again to monitor the coil case shape during the entire process, allowing real-time adjustments to the weld paths in response to the actual deformation observed. With this careful technique, deformation over 9-metre-wide coil was optimized to 1.5 mm.


The success of the first winding pack insertion operation in Japan confirms the technologies and tooling of the selected technique and demonstrates that QST contractors can meet the tight tolerances required. This is excellent news, as work is proceeding In Japan on the fabrication of eight other ITER toroidal field coils.

At MHI's Futami plant, the next step will be to install and weld the inner covers that complete the case assemblies (see the AP and BP components in the diagram here) and finally to inject resin to fill any space between the winding pack and the coil case. With the strong collaborative effort between MHI and MELCO, the Japanese Domestic Agency is confident of meeting these challenges in full respect of all project specifications.