Share Tweet
Gas fuelling manifolds | How different gas species reach the plasma
The Chinese Domestic Agency has delivered the first part of the gas injection system, a series of pipes that transports all gases into the Tokamak Building from the tritium plant. 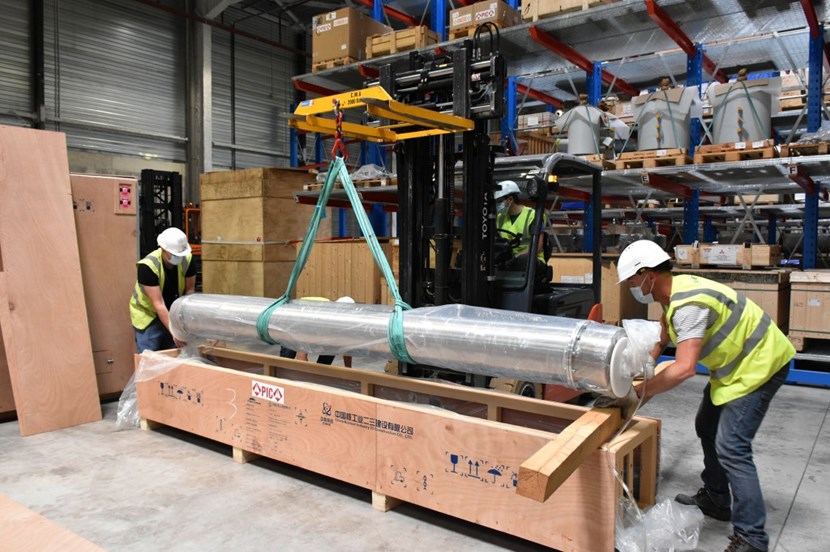 The Chinese Domestic Agency is procuring 100% of the gas injection system, including the fuelling manifold system that delivers different gas species from the tritium plant to the vacuum vessel.
Housed next to the Tokamak Building, the tritium plant is a highly sophisticated plant performing advanced chemical separation and purification, where the exhaust gases from the Tokamak are recovered, processed and stored for recycling or venting.


"The gas injection system will also carry other gases, including nitrogen, argon and neon, as well as two isotopes of helium and three isotopes of hydrogen, depending on the phase of operations," says Paul Jordan, mechanical engineer in the Fuelling & Wall Conditioning Section.


Two different piping systems—so called manifolds—will be put in place: one is called the gas fuelling manifold, feeding the torus for plasma operation; the other, called the neutral beam manifold, delivers hydrogen and deuterium to the neutral beam heating and current drive system. Within each system is a central evacuation pipe, which transports vented gases to the tritium plant, where they can be processed.


Around this central channel are the injection pipes—six for gas fuelling, three for the neutral beam system. In both systems, process pipes are contained in a 25-centimetre (10-inch) guard pipe, in which the interspace is inerted by dry nitrogen gas. This nitrogen gas flows towards the tritium plant for leak detection. 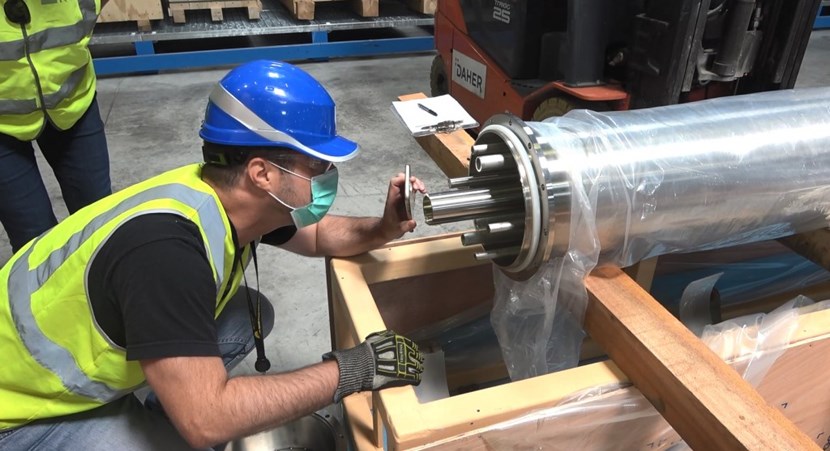 Inside the 25-centimetre guard pipe, six process lines—with gas going toward the plasma—surround a central evacuation pipe that transports vented gases from the machine back to the tritium plant.
The gas fuelling manifold terminates at several gas valve boxes that control the flow rates of all gases, dosing them into the torus. Within the gas valve box will sit a gas flow controller that is not only fast, but that can also survive the radioactive environment. The Chinese Domestic Agency is developing its own gas flow controller, because nothing on the market meets the requirements for response time and compatibility with the harsh environment.


The gas injection system has to meet the strict French regulations, with extra care for transporting radioactive and flammable gases. Any leaks from the process pipes will be detected by the counter flowing nitrogen, and carried back to the tritium plant, where leak detection mechanisms quickly raise alerts to allow a safe machine shut down.


"There is a pressure cascade from the room where manifolds are located, and process pipes to prevent gases are leaking out," says Jordan. "We actively keep the pressures at these levels—and if we detect any anomalies, we shut down the plasma."


"Because the gas injection system is a PIC [protection important component] system, a big part of our work has been keeping safety fully involved. Like all of ITER we deal with tolerance and quality concerns in our materials and our craftsmanship. A lot of our work here in France has been to stay in close contact with our manufacturer and our Domestic Agencies, and to work hand-in-hand with them to maintain the highest standards."


All connections of the inner pipes in the gas injection system are full penetration welds, with special considerations being taken for welding—especially with the ITER grade stainless steels. Before shipping, all welds were radiographed as a required non-destructive test (NDT), and all the pipes were helium leak tested. To protect the manifolds during shipping, unique frames were custom built to support each spool.


"Just in case, we perform our own inspections after receiving the manifolds on site," says Jordan. "Our final checks involve high-tech measurements of some of the more complicated parts using metrology."


"Not only do keep safety involved in all aspects of our work, from start to finish, but we also have a full-time quality engineer on our team—just to make sure we don't miss anything."