Cryostat manufacturing comes to an end in India

Share Tweet
Industrial milestone | Cryostat manufacturing comes to an end in India
With a flag-off ceremony on 30 June, India's L&T Heavy Engineering marked the end of an eight-year industrial adventure—the manufacturing of the ITER cryostat. The top lid in the background gives a dizzying sense of the size of the ITER Tokamak. An industrial adventure that began in 2012 has come to an end for the Larsen & Toubro teams in Hazira, India. However, work at the ITER site will continue another four years, as the four sections are progressively lowered into the Tokamak pit and welded.
In September 2012, the Indian Domestic Agency concluded a contract with Larsen & Toubro for the fabrication of the 3,800-tonne ITER cryostat—the world's largest steel vacuum chamber (16,000 m³) and a critical part of the ITER machine.
Eight years later, the final segments are ready for shipment to ITER. Twelve segments of the top lid plus one central disk—650 tonnes in all—will leave India to be assembled and welded on site in a dedicated workshop.
Completely surrounding the vacuum vessel and superconducting magnets, the 29 x 29 metre cryostat acts as a thermos, insulating the superconducting magnets at ultra-cold temperature from the outside environment and contributing to structural reinforcement by supporting the mass of the machine and transferring the mechanical loads of the ITER machine to the concrete structure of the tokamak pit.
"The ITER Project and ITER India were very fortunate to have Larsen & Toubro as our partner and the primary contractor for cryostat fabrication," stressed ITER Director-General Bernard Bigot by video connection during the ceremony. "As a company with more than 80 years of experience, we knew that Larsen & Toubro had built nuclear plants, shipping ports, airports, and specialized vessels such as giant ocean tankers and submarines." 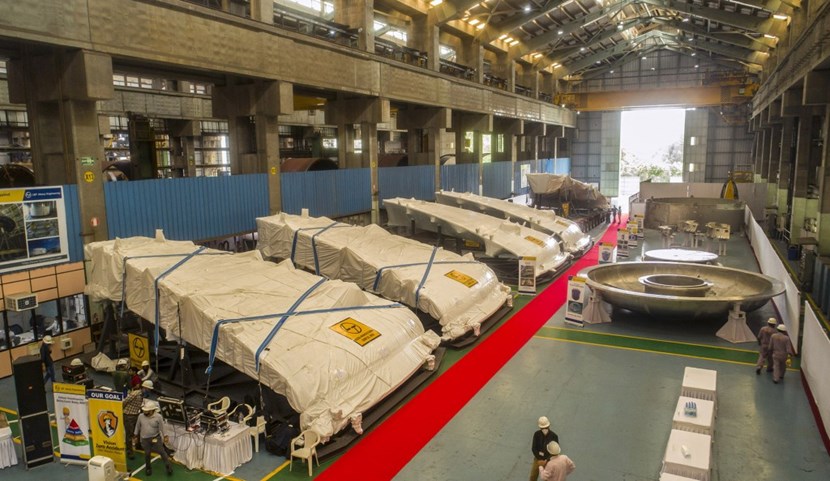 The world's largest steel vacuum chamber was built in 54 segments in this Larsen & Toubro factory. The last 12 segments (plus central disk) for the cryostat top lid are nearly ready for shipment.
The size of the component meant that Larsen & Toubro had to plan for a three-stage, kit-like process, first manufacturing 54 segments in India and shipping them to ITER, then assembling the segments into four large manoeuvrable sections (base, lower cylinder, upper cylinder, top lid) in the on-site Cryostat Workshop, and finally integrating and welding the sections together in the Tokamak Pit. From the start, Larsen & Toubro has worked with MAN Energy Solutions of Germany as the subcontractor for welding operations at the ITER site.
Since work began on site in 2016, three of the four cryostat sections have been completed and handed over to the ITER Organization. The cryostat base was installed in the Tokamak pit on 26 May 2020, and the lower and upper cylinders are currently stored in protective wrapping outside of the workshop. The lower cylinder will be moved into the Assembly Hall in August 2020 to prepare for the lowering operation.
"The making of the ITER cryostat is a shining illustration of what the ITER international collaboration is about: committed men and women working to the best of their ability in different parts of the world as a "One-ITER" team, to meet an ambitious and unprecedented challenge," concluded Director-General Bigot.
Read more about on-site cryostat fabrication here.
Watch a recording of the event here.