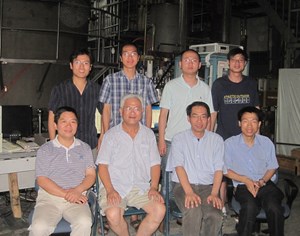 For this they use a short segment with high temperature superconductor (HTS), which can carry much higher current-densities than normal conductors such as copper. It can therefore conduct the current using much less material (smaller cross-sections), thus reducing the heat conduction.

The heat load reduction by the HTS current lead results in a decrease of the power input (here cryo-power), greatly improving the efficiency of the ITER device. The HTS current lead technology is therefore one of the "enabling" technologies for a fusion tokamak.

The HTS current leads are part of the so-called feeders, a set of ITER components provided by China.

The Institute of Plasma Physics of the Chinese Academy of Sciences (ASIPP) in Hefei, China, started development of such current leads more three years ago. In Dec 2008, Newsline reported on a successful test of a 68 kA current lead prototype needed for a toroidal field coil feeder.

The results were discussed at a special meeting of the ITER HTS working group at KIT in Karlsruhe, Germany, last week (15-16 July). This successful test completes the HTS current lead R&D conducted at ASIPP in preparation of the feeder final design review this coming September for which the feeder teams in China and at the ITER Organization are now feverishly preparing.