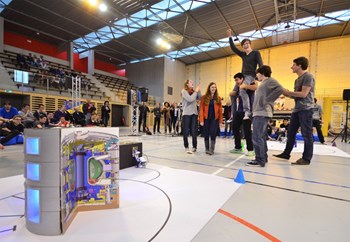 Victory is sweet: the high school team from Lycée Thiers in Marseille savours the reliable performance of its robot, baptized Bip-Bip.
Some of the Region's junior high and high school students woke last Thursday 16 May with one idea in mind: victory ...


Since October for some, January for others, their science and technology classes, lunch breaks and Friday afternoons had gone to realizing and programming a small Lego robot—one that would successfully participate in and, if possible, carry the ITER Robots challenge launched by Agence Iter France and the ITER Organization for the second consecutive year. Each of the teams worked from a standard Lego kit that they customized, improving the optical sensors in some cases or modulating the articulating arm.


The five junior high and seven high school teams that had taken up the challenge arrived early at the Lycée des Iscles in Manosque, Lego model in hand, surrounded by their professors and classmates.


"A month ago, the jury visited the schools to assess the level of readiness, the technical maturity of each project," said Jean-Pierre Friconneau, an engineer in the Remote Handling Section at ITER and moderator for the day. "I have to say that we were very impressed by the candidates' understanding of the technical description, their organization. It was interesting to see the differences in the solutions imagined and very gratifying to see the young people's enthusiasm."


The first challenge, untimed, was to follow a pre-defined trajectory on the mat including curves, 90-degree turns and about-faces. A good number of the candidate teams—four of five junior high teams and four of seven high school teams—were eliminated after three unsuccessful tries at this stage. 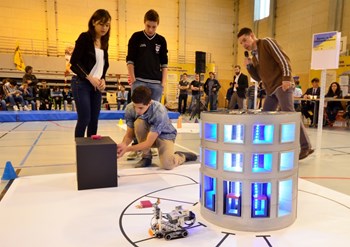 At the junior high level, it was a clear victory for the Sainte Tulle team for the second consecutive year, with their rapid and precise Tokalios robot. The recipe for success? ''Close team work and pleasure in working on this project with our professors.''
As Jean-Pierre explained to the disappointed teams, because the lighting and surface conditions were not necessarily the same as those in the home practice areas only the teams that had included enough of a tolerance margin in their programs were successful: "Engineering comes down to making choices, and all engineers learn from their mistakes," he told the students, as he encouraged them to persist in their exploration of mechanics, electronics and programming.


For the teams still in the race, the second challenge was a timed remote handling task that involved picking up as many blanket modules as possible from the ITER Tokamak model and delivering them successfully to the nearby Hot Cell.


"The technical complexity of this competition and the fact that the students have worked together, collaboratively, around a common project, responds in all points to what we'd like to see more of in schools," said Bruno Pélissier who, as inspecteur pédagogique d'académie, is involved in the content of school programs in the area. "We supported this program—and worked hard to extend it to the high schools—because it provides an opportunity for practical, hands-on applications for what is learned in the classroom."


At the junior high level, it was a clear victory for the Sainte-Tulle team for the second consecutive year, with a robot that was rapid and precise. Their recipe for success? "Close team work and pleasure in working on this project with our professors," team leaders Alicia, Flavien and Mathis reported.

The second annual ITER Robots challenge was hosted in the gymnasium of the Lycée des Iscles, in Manosque. Over 200 students came by bus from near and far with one idea in mind after months of work ... victory!
The high school competition was a tighter contest, with three teams advancing to the second stage—Lycée Thiers from Marseille, Lycée d'Altitude from Briançon, and Lycée des Iscles—and only two on to the final stand-off where the jury gave each team minutes to re-program their robot to pick up a specific module, chosen by throw of the dice.


Even the professors were surprised to see how well the teams responded under pressure. "What I saw," said a supervisor from Briançon, whose group placed second, "was that a group that was very disparate at the start came together around this year-long project. It motivated them. The students made their own choices in conceiving and programming their robots and we stood back and watched them go down unsuccessful roads before they found the solutions that worked. You have no idea how valuable an experience like that is. We're really happy to be here today."


In the end, the first prize at the high-school level went to the Lycée Thiers from Marseille. The winning team walked away with passes for an afternoon of Laser Game with their classmates and an educational robot that will allow them to continue their exploration of robotics.