A twice in a lifetime opportunity

Partager Tweeter
A twice in a lifetime opportunity
One of the most important milestones in fusion history was achieved on 9 November 1991 when the European tokamak JET produced a significant amount of power for the first time from the fusion of deuterium and tritium nuclei.
JET had achieved fusion with 10 percent tritium only. Two years later, the American TFTR, a tokamak of slightly smaller size, followed suit with a 50/50 deuterium-tritium (DT) mix. 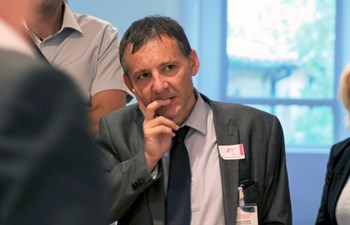 '' I didn't think my generation would have another chance to participate in DT experiments,'' says Xavier Litaudon who, as a young physicist, was part of the 1997 campaign at JET. © Christophe Roux CEA-IRFM
Throughout the 1990s, the two machines were to enter a "friendly competition" that culminated in 1997 with a record production of 16 MW at JET and, even more significant for the future of fusion, a series of 5-second, 4 MW stationary shots in H-mode that formed the basis for extrapolation to ITER.


The year 1997 marked the end of the great DT adventure, however ... at least as concerns the 20th century—JET had completed its campaign and budgetary constraints in the US led to the dismantling of TFTR. No further campaign was planned, with the exception of an experiment with trace tritium at JET in 2003.


The fusion community had glimpsed the Holy Grail; its members would have to wait for ITER to bring it home. But in 1997, ITER was still many years from realization ...


"It's been almost 20 years. It was a fantastic experience and, at the time, I didn't think my generation would have another chance to participate in DT experiments," says Xavier Litaudon who, as a young physicist, was part of the 1997 campaign at JET.


Litaudon, who until recently headed the Heating and Confinement Department at CEA's Institute for Magnetic Fusion Research (IRFM), is a lucky man. Not only will he soon have another shot at "real" fusion but he will manage the European participation and scientific exploitation of the 2017 DT campaign as head of the EUROfusion ITER Physics Department. (1)


Since it entered operation in 1983, the European tokamak JET has always been at the heart of fusion research. Now, equipped with an ITER-like beryllium wall, an ITER-like tungsten divertor and upgraded heating systems, it is centre stage more than ever: "JET has become a much more ITER-like machine and will continue to provide answers to the big questions that are essential for ITER operation," he says.


In July, the European Commission and the Culham Centre for Fusion Energy, signed a EUR 283 million contract that insures that JET will be financed until the end of 2018.


As JET is being readied for its 2017 deuterium-tritium campaign, the CEA superconducting tokamak Tore Supra (operated next door to ITER at CEA Cadarache) is undergoing major transformation to be used as a test bench for ITER.


This transformation will allow the upgraded 25-year-old tokamak (now part of EUROfusion's ITER Physics Programme) to test ITER-class, actively cooled divertor plasma-facing units. Like JET, Tore Supra will contribute to answering questions that are of vital importance for ITER. A first short-pulse experiment (~10 sec) is scheduled for early 2016 with a few ITER-like actively cooled sectors complemented by inertial cooled sectors made of graphite with tungsten coating.

Throughout the summer holidays and well into October 2014, JET ran a series of experiments with deuterium plasmas, focusing on developing ITER-relevant plasma scenarios and addressing important ITER issues such as disruption mitigation and runaway electrons.


The machine is now shut down and will restart in May 2015 to resume its scientific campaign in September with a refurbished ITER-like ion cyclotron resonance heating antenna and an optimized pellet injector (frozen deuterium pellets are injected into the plasma to mitigate instabilities known as ELMs).


The "real thing" —implementing the actual fusion fuels deuterium and tritium—will only begin when all machine components have been commissioned, the operating scenario developed at full fusion performance, staff trained, safety measures checked and diagnostics systems adjusted. This will take the better part of two years.


JET has changed a lot in 20 years, becoming more and more like ITER, and so has the world of fusion research. Fuelled by conceptual advances and the feedback from dozens of fusion machines, considerable progress has been made in understanding plasma behaviour and new "scenarios" have been developed, leading to better sustained plasma performance. (JET is collectively used by more than 350 scientists and engineers from all over Europe.)


"We want to demonstrate that what we have observed with deuterium plasmas can be extrapolated to DT," says Litaudon. "We will be operating JET as if it were ITER. In that early phase, plasma current (~4 MA) and magnetic field (~4 Tesla) parameters will be comparable in both machines..."


JET is the only operating machine licenced for tritium but it is not totally "ITER-like." Its smaller plasma volume (~ 100 m3 as compared to ITER's 840 m3) will limit fusion performance and its conventional (non-superconducting) coils and the fact that both its wall and divertor are not actively cooled will impact the duration of the plasma shots.


However, the feedback from DT experiments in JET will be decisive for validating the ITER scenarios and readying the young generation of engineers and scientists for ITER operation. "It's a matter of time and money," says Xavier Litaudon. "If we gain one year on the learning curve, ITER can save a few hundred million euros..."