Partager Tweeter
Hoisting the roof, mountain-climber style
In order to climb the face of steep cliffs, mountain climbers use a clever device, invented in the 1950s, called a "rope ascender." Also known by its brand name Jumar, the device can be compared to a mechanical hand that can slide up a rope but that is prevented from sliding down by a locking clamp. 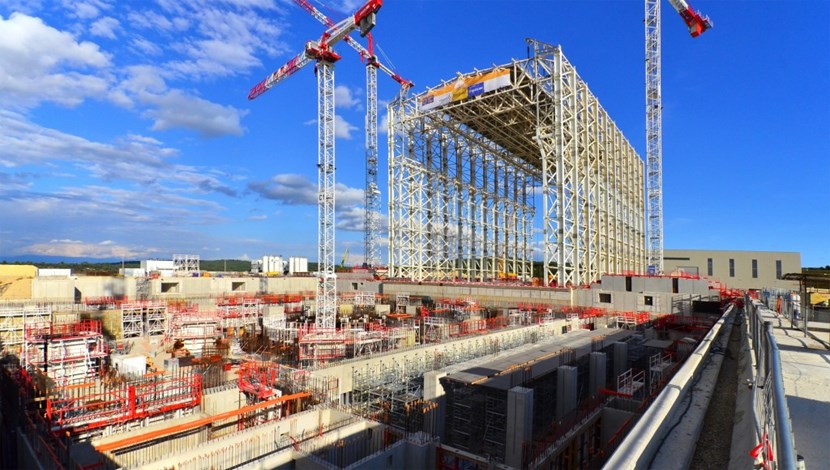 A similar mechanical principle was used, last Thursday 10 September, to lift the steel roof structure of the ITER Assembly Building. Since April, construction contractors had been assembling the 730-tonne structure on the ground to be lifted as one piece.


Centimetre by centimetre, over the course of 14 hours, 22 hydraulic jacks hoisted the huge structure along thick steel cables that hung from support structures fixed temporarily to the top of the pillars, 60 metres above the surface of the building's basemat.


The operation had to be carried out with extreme care. The structure, measuring 60 metres long and 25 metres wide, had to be precisely positioned between two rows of vertical pillars, with a tolerance of only a few centimetres on each side.


It began with a mere 20 cm lift in the morning of Wednesday 9 September, followed by precise laser metrology to measure potential deformation of the steel structure. By Thursday morning, all systems were go, the wind below the 11 metre per second safety limit and the 50-metre lift could commence.


The successful lift operation had a high symbolic value for the ITER Project. "It is here, in the antechamber of the Tokamak Complex, that the main components of the ITER Tokamak will be prepared and pre-assembled," explained ITER Director-General Bernard Bigot in the short speech he gave prior to cutting the ribbon. "Without this building there would be no assembly, and without assembly there would be no machine and no project..."


The ceremony was broadcast live to the ITER staff assembled in the Headquarters amphitheatre and by video feed to the ITER community throughout the world.


The construction milestone demonstrated, once again, the value of close collaboration between all project stakeholders. Under the authority of the European agency for ITER (Fusion for Energy), more than a hundred workers, engineers and technicians worked in shifts for the success of the operation.


"The months and years to come will continue to demand effort and dedication from all of us," said Director-General Bigot, "but we are all conscious of working for one of the greatest ventures in the history of mankind, one that could change the course of our civilization..."


As the ribbon was cut, 500 ITER-yellow and European-blue balloons slowly ascended to the top of the structure and out to the clear sky. The "house" now has a roof and the ITER family is impatient to move in.