Partager Tweeter
Unloaded, delivered, unwrapped...
The three-trailer convoy that passed the ITER gates at 2:30 a.m. on Thursday 10 December held a strong symbolic significance for all those involved in the project.


For the first time, actual elements of a machine component were being delivered. Shaped like so many slices of pie, the three 60-degree segments belong to one of the most critical components of the machine: the ITER cryostat, the huge steel cylinder that will act as a "thermos" to maintain the ultra-cold temperature of the superconducting magnets and that will provide structural support as well as penetrations to the vacuum vessel and magnet systems. 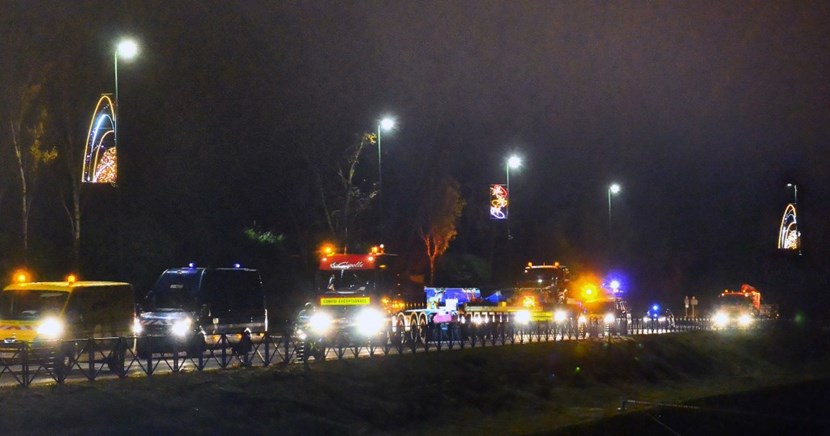 The three-trailer convoy transporting three ''60-degree segments'' belonging to the the cryostat base section passes through the village of Saint-Paul-lez-Durance, a few kilometres before the ITER site.
However large and impressive, the three 50-tonne elements delivered to ITER are but a small part of the completed component, representing only 1/25th of the mass of the cryostat (3,850 tonnes). ITER's cryostat will be the largest, and also the most complex, stainless steel high-vacuum chamber ever built.


Procured by India and manufactured at Larsen & Toubro's Hazira plant, the three segments delivered on Thursday and the three others that are expected on 17 December will form tier 1 of the cryostat base section. 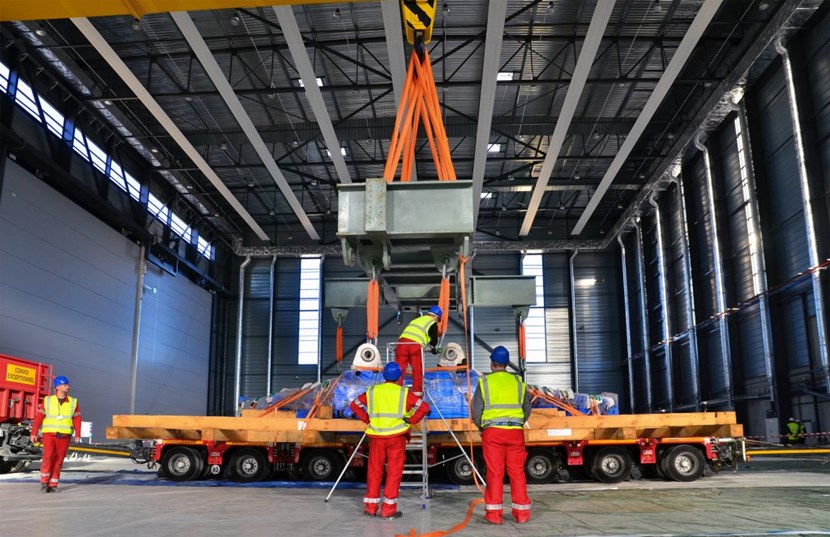 However large and impressive, the three 50-tonne elements delivered to ITER are but a small part of the completed 3,850-tonne component.
Once all segments and additional parts have been delivered, unpacked and stored in the Cryostat Workshop, ITER will have achieved the first milestone validated by the ITER Council during its November meeting for the years 2016-2017 ─ one that was scheduled for the first quarter of 2016.


"We are three days early in our celebration, as the rest of the shipment is due on 17 December," said ITER Director-General Bernard Bigot at the small gathering organized on Monday 14 December in the Cryostat Workshop. "But we can already celebrate a great accomplishment, one the is the fruit of remarkably integrated work and coordinated effort and that represents the first milestone of the new proposed Baseline."


Online from halfway across the globe, Shishir P. Deshpande, head of ITER India, stressed the importance of the "professionalism and enthusiasm" of logistics provider DAHER who handled the loads all the way from India to the ITER site.


Philippe Tollini, Larsen & Toubro director for Europe and Russia, noted an interesting coincidence: "As if on cue, the cryostat segments were delivered to ITER on the last day of the Conference on Climate Change in Paris. It was a way of saying ─ yes, ITER's (and fusion energy's) contribution to the future of the planet is on its way..."


In a few months ─ in March or April according to the schedule ─ tier 2 of the cryostat base will be delivered, followed by tier 1 of the lower cylinder. Heavy frames and welding equipment will be brought in the Cryostat Workshop and by the summer of 2016 welding operations will begin.


"Let us be proud of what is being accomplished here; but let us also be humble in the face of what remains to be done," said Director-General Bigot. "Beyond what we see here, beyond the steel and the highest technology, there is a project that is essential for the future of mankind. It is our pride, honour and responsibility to bring it successfully to completion."