Partager Tweeter
ITER Robots stimulate "creativity, teamwork and enthusiasm"
A drone is flying over our heads; robots are moving on the ground. Exhibit booths are being installed in a studious atmosphere. Despite appearances, we are not at a technology fair but at the finals of the 5th edition of the ITER Robots contest—organized by Agence Iter France in close collaboration with the ITER Organization, the regional representation of the Ministry of Education, and CEA's Research Institute on Magnetic Fusion (IRFM) —at the Lycée des Iscles high school in Manosque. 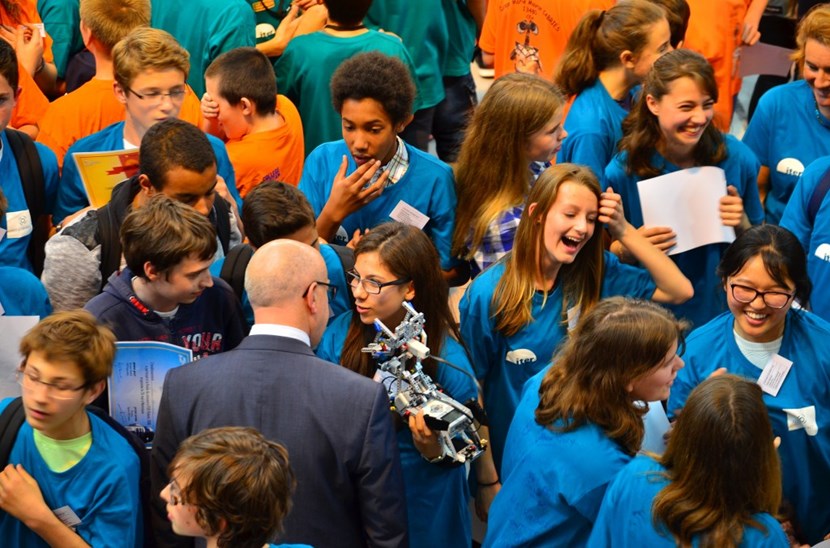 
While technically oriented students were focused on the mechanical programming of the robot, their creative colleagues planned promotional display booths. ''We spent six months on this project," says 15-year-old Olivia, who was responsible for the programing of Isis 2.0—the little robot that won the final. "Participating in this contest was the occasion to learn how to work as a team and to approach technology in a fun way.''


The particularity this year was a general knowledge test that questioned students on the historical aspects of the ITER Project. After demonstrating that their robots could follow a predetermined trajectory and perform a number of remote handling tasks, the participants were asked to answer a series of questions on ITER.


"The contest this year opened its doors to a larger audience," rejoiced Rolland Rajaonarivony, a teacher in Salon-de-Provence and advisor for education in science and technology. "The opportunity to create a stand and the test in general knowledge attracted the non-technical profiles, giving every student a chance to play a role in the team.''


Sarah, a junior high student from the Rosa Parks Junior High in Marseille, agrees. "The contest was the occasion to learn about the ITER Project and to learn about ourselves. It enhanced our curiosity and our ability to manage a project from beginning to end."


For Sarah's teacher, winning the general knowledge test was the best reward for their efforts that, hopefully, will encourage the students to participate again next year.


For five years running, this successful contest has demonstrated the enthusiasm of young people for science and technology. At the award ceremony ITER Director-General Bernard Bigot congratulated the students on their "creativity, teamwork and enthusiasm''—three key qualities for the success of any scientific or industrial venture.


View the photo gallery below ...