Coming soon: cryoplant components from all over the world

Partager Tweeter
Coming soon: cryoplant components from all over the world
Manufacturing for the world's largest single-platform cryogenic plant is progressing, with a series of factory acceptance milestones successfully passed (or imminent) and the first completed components expected on site next month. 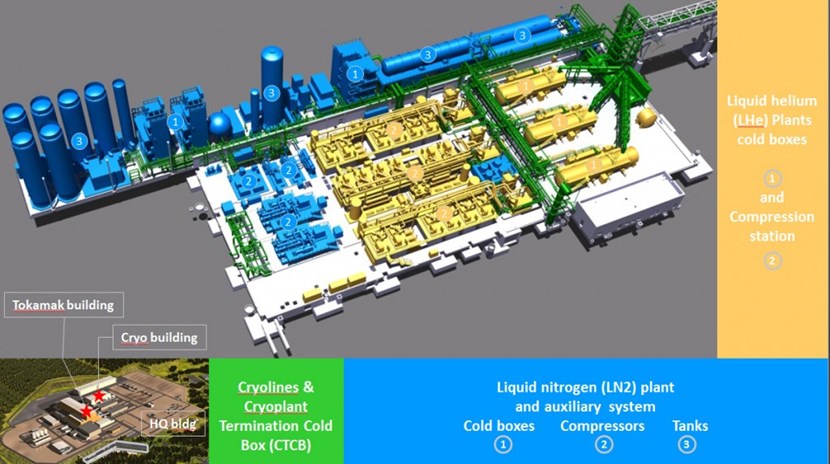 The LN2 plant (blue, under the responsibility of Europe) will produce liquid nitrogen at a temperature of minus 196 °C to be used as a ''pre-cooler'' in the LHe plant (yellow, procured by the ITER Organization). Nearly 25 tonnes of liquid helium at minus 269 °C will circulate through a five-kilometre network of pipes, pumps and valves procured by India (the first part of the network is shown in green) in order to cool the superconducting magnets, the thermal shield, vacuum cryopumps, and certain diagnostics.
Three parties are sharing responsibility for the procurement of the ITER cryoplant—the ITER Organization, responsible for the liquid helium plant; Europe, in charge of the liquid nitrogen plant and auxiliary systems; and India, whose contractors are procuring the cryolines, the warm lines and cryodistribution components.


Europe is also building the 5,400-m² facility that will house the cryoplant on the ITER site.


Within the frame of industrial contracts signed for the procurement of each package, hundreds of components are currently in late-stage design or fabrication phases. Beginning next month, deliveries will be converging on ITER from factories in Turkey, India, China, Sweden, Czech Republic, Finland, Italy, Japan, and various points in France ... some 450 shipments in all.


The Cryogenic Project Team expects fully 90 percent of plant components on site by the end of the year, to be stored until the building and technical areas become available for the start of installation activities.


Among recent fabrication milestones, the European Domestic Agency has reported successful factory acceptance tests (FAT) for 85-tonne nitrogen compressors and a series of turbines, while two out of the three cold boxes for the liquid helium plant under ITER Organization procurement are fully equipped and ready for transport. All three of the 137-tonne liquid helium plant cold boxes are expected on site in November.


A number of unique features will guarantee stable and flexible operation despite unprecedented dynamic heat loads caused by magnetic field variations and fusion neutrons. The plant is also designed to operate over a wide range of ITER plasma scenarios, from short plasma pulses (a few hundred seconds) with 700 MW of fusion power to long plasma pulses of 3,000 seconds with 365 MW of fusion power.


In the build up to the machine's First Plasma, the cryoplant will provide the gradual cooldown and fill of the magnets and thermal shields and the cooldown of the cryopumps that are used to achieve vacuum in the cryostat and vacuum vessel.


Scroll through the gallery below to see images of cryoplant manufacturing. (Photos courtesy of Eric Dupasquier, Air Liquide, unless otherwise indicated.)