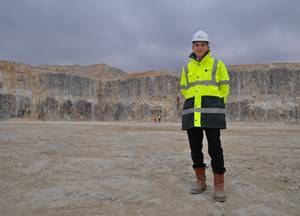 Most of us know Nicolas as the young man who checks that you always have your hardhat on and that you never step where you're not supposed to. But there's much more to his mission: at 27, he is ''the voice of safety on behalf of the Building Owner'' on the work site.
Ambitious young people, in France, can tread such prestigious avenues to technical excellence as École Polytechnique, École Centrale, École des Mines, or any other of the famed French grandes écoles.


Or they can choose the more humble and generally overlooked alleyway of "apprenticeship" which combines on-the-job training with academic learning and provides an early, in-depth experience of the work environment.


Because he could never "remain seated for more than two hours in a row," Nicolas Robic always chose the humble alleyway over the prestigious avenues: Technical Diploma, B.S., Master's... he earned them all by way of work-study programs.


He does not regret it: at 27, as APAVE Health and Safety Coordinator for the European Domestic Agency Fusion for Energy (F4E), Nicolas is a young man with considerable responsibility on his shoulders.


Those of us who have business on the ITER work site know him as the smiling, but inflexible, enforcer of safety regulations—the man who will check that you always have your hardhat on and that you never step where you're not supposed to.


This, however, is only a small part of his mission. "By law," he explains, "any Building owner must have a Health and Security Coordinator. This function is generally subcontracted to a company specialized in risk-control, a solution that keeps the Building Owner from being both judge and party."


As Building Owner, F4E delegates risk-control implementation on the ITER work site to APAVE, a French company that was established more than a century and a half ago and serves some 200,000 clients around the world. 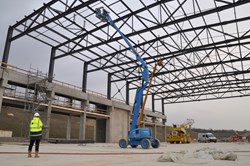 ''It is not a 'cop's' job,'' says Health and Security Coordinator Nicolas Robic. ''I'm more like a counsellor, or an adviser. But I can be a tough law enforcer when needed...''
Building on his experience from the Laser Megajoule (LMJ) inertial fusion project between 2004-2009, Nicolas sees himself as "the voice of safety on behalf of the Building Owner" on the work site.


Safety relies on anticipation, and a part of Nicolas' mission consists of assisting both Building Owner and Architect/Engineer (in the case of ITER, the Engage Consortium) in the preparation of the "future maintenance" of the buildings.


"I have to make sure, for instance, that the buildings' design provides for safety equipment such as guardrails of the required height or convenient access staircases to the roof. I have to tackle issues that architects generally disregard: How will the bridge cranes be maintained? How will the light bulbs be replaced when the lighting systems stand 20 metres above ground? And this holds for all 39 buildings that will be erected on the ITER platform..."


Another essential part of Nicolas' mission, in close cooperation with the Architect/Engineer, is to coordinate the activities of the different companies operating on site such as organizing working areas, access and circulation.


The ITER platform, at times, can be a very busy place, with concrete being poured here when trucks and scrapers rush around and raise dust there—not to mention the mining operations when the Tokamak Seismic Pit was being excavated.


"I spend a lot of time on site making sure that safety rules are observed. It is not a 'cop's' job—I'm more like a counsellor, or an adviser. But I can be a tough law enforcer when needed... F4E's objective is "zero accidents" and we all have to work hand-in-hand to achieve that."


Apart from "having to speak English," Nicolas' present work is not very different from his previous experiences at LMJ or at the EPR nuclear reactor worksite in Flamanville, Normandy. Meticulous and organized, he sticks reminders on his office walls such as "Expression of the Day" and "Mistakes to avoid"...


Every Monday, Nicolas takes the 7:00 a.m. flight from Bordeaux, where he lives with his soon-to-be wife, to Marseille. He is not considering moving to Provence for the moment. A passionate body-boarder, he's not ready to trade the barrel waves of the Atlantic for the wavelets of the Mediterranean.