Share Tweet
Toroidal field coil cases: first segment shipped
Teams in Japan have successfully manufactured the 71-tonne inboard leg of the first toroidal field coil case. Formed from three smaller segments welded together, the completed leg is an achievement that crowns a lengthy research and development program carried out to select the materials, tools, welding procedures and machine finishing processes that guarantee the conformance of this first sub-assembly—and those that will follow—to ITER's rigorous technical specifications and tolerances.

This 71-tonne component forms the straight-back portion of the D-shaped toroidal field coil case. Formed from three smaller segments welded together, this inboard leg is the first of nineteen that must be manufactured.
The smiles are enough to tell the story. At Mitsubishi Heavy Industries in Futami, Japan, the mood was ebullient on 21 July as staff from QST*, the ITER Organization, Mitsubishi and the European Domestic Agency and its supplier gathered for the fitting test of the first toroidal field coil case segment. Following this key step—during which a cover plate was successfully matched with the inboard leg—the component was packed and is now on its way to Hyundai Heavy Industries in Ulsan, Korea, where it will be fitted to the outboard leg in trial tests. (Hyundai Heavy Industries is responsible for part of coil case fabrication through a contract with QST).


The cases have been challenging components to design and manufacture. The structures must be able to withstand an applied electromagnetic force of as much as 60,000 tonnes and an operating temperature of 4 K—making the choice of high yield strength, fracture-resistant material highly important. The multiyear development program that preceded manufacturing led researchers to the selection of a high-strength fully austenitic stainless steel (316LN) whose nitrogen content was increased to about 0.2 percent, plus a specially developed stainless steel (JJ1) for use in areas that will receive the highest stress to ensure a yield strength of 1,000 MPa and fracture toughness of 180 MPa √m at 4 K. 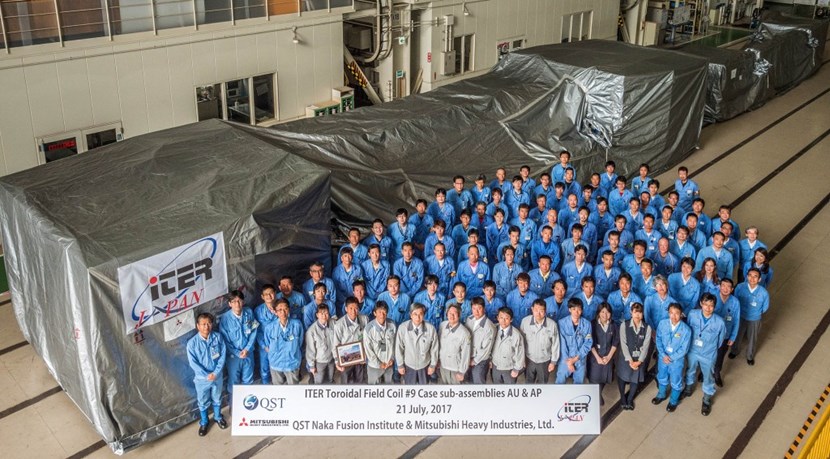 Following the successful verification of its dimensions and tolerances in Japan at Mitsubishi Heavy Industries, the component has been shipped to Korea, where it will be fitted with its ''second half.''
Case fabrication began in April 2014 with the start of qualification activities.


Toroidal field coil cases will stand 16 metres high when finally completed, but first their individual components must be welded together and machine finished. Ultra-high precision is required, with tolerances of less than 1 mm. (Compared to the permitted welding deformation tolerances for typical large welded structures, this represents a difference of more than one order of magnitude.) Keeping welding deformation under control was a major hurdle especially given the thickness of some areas that exceeds 200 mm. The team rose to the challenge by welding from both the front and back surfaces to counteract welding deformation, and measuring regularly as the work progressed. 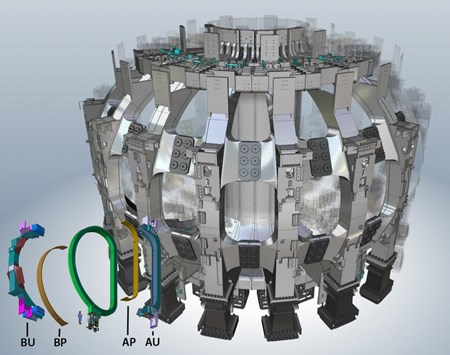 The different elements of the D-shaped toroidal field coil assemblies are shown in the insert: the inner winding pack (in green), and the inner (BP, AP) and outer (BU, AU) coil case sub-assemblies. Japan has successfully completed the first inboard leg (''AU'') sub-assembly.
The team also had to compensate for the effects of thermal contraction caused by changes of temperature in the structure during processing to ensure the final product reached tolerances of less than 1 mm.


It took the combined efforts of QST and its suppliers as well as the ITER Organization to make such challenging requirements a reality. Success was confirmed as the first inboard leg passed fitting tests, during which the inboard segment (with its U-shaped cross section) was fitted for the first time with its corresponding cover plate. Observers were pleased to report that the strict tolerances of ± 0.3 mm were met along the entire 14-metre-long weld groove. It took only about half a day to fit the cover plate on the inboard segment, which is good news for the integration work that must be done in the future on the coil cases after insertion of the winding packs.


The first inboard coil case segment has now reached Hyundai Heavy Industries in Korea, where it will be fitted to the outboard leg (shown as "BU" in the image) in trial tests scheduled to take place in the next couple of months. Upon completion of the tests, the full coil case will be shipped to Europe for integration with the winding pack.


*QST—Japan's National Institutes for Quantum and Radiological Science and Technology—is responsible for all components allocated to Japan by the ITER Organization.