Unique but inspired by history

Share Tweet
The crown | Unique but inspired by history
On the floor of the vast amphitheatre that will accommodate the ITER machine, one of the most complex and most strategic structures of the Tokamak Building is taking shape. 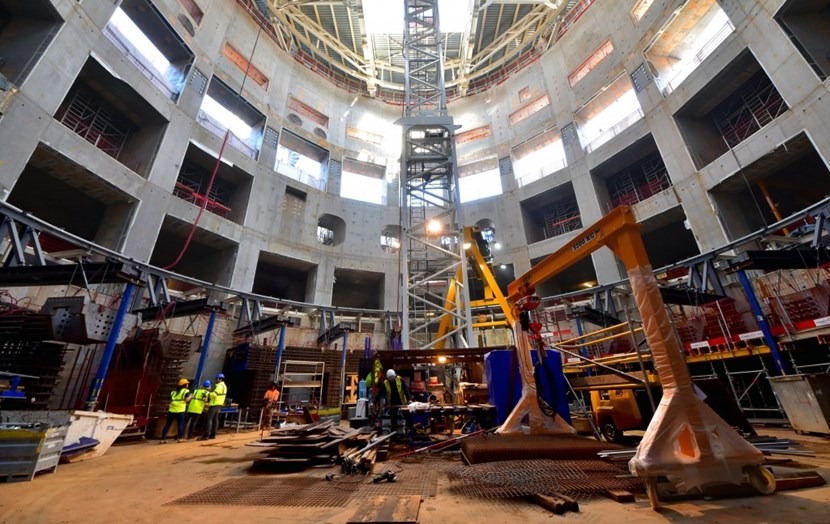 Down on the floor of the Tokamak Pit the steel reinforcement for about one-fourth of the crown has been set into place and—thanks partly to a recently-implemented night shift—work is progressing quickly on the remaining three-fourths.
Reminiscent of a spiked crown—not unlike the one atop the Statue of Liberty—the structure is designed to support the combined mass of the cryostat and Tokamak (25,000 tonnes) while transferring the forces and stresses generated during plasma operations to the ground.


Aptly enough, the structure sitting at the bottom of the Tokamak Pit is called ... a "crown."


Its principle is inspired by the "flying buttress"—an architectural solution that was implemented eight centuries ago to prevent a cathedral's walls from collapsing outward under the weight of its stone ceiling and slate roof.


In the long story of the design of the ITER buildings, the crown is a relative newcomer: up until 2012, the baseline solution to support the machine consisted of a circular arrangement of 18 sturdy steel columns.


However as models and simulations were refined, it became clear that the load transfer from the Tokamak's mass and movements to the floor of the Tokamak Complex (the B2 slab) was not totally satisfying.


Machine "up lift" from a potential vertical displacement event,  cryostat "shrinkage" from a possible ingress¹ cooling event  ... these potential events were of particular concern to safety experts.


Developing an alternate option to the columns led to a one-year collaborative effort involving several ITER departments, the European Domestic Agency responsible for building construction, and their architect engineer Engage. 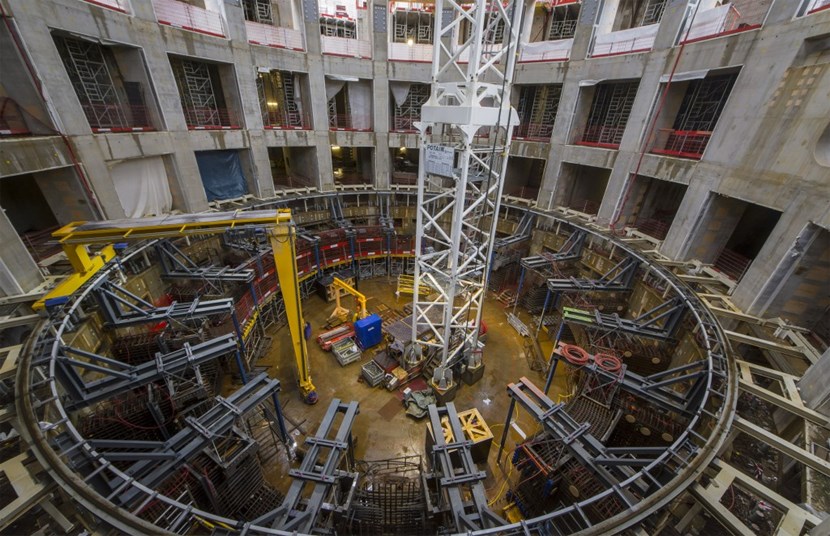 Inspired by history but unique to ITER, the radial walls are the ''spikes'' of the crown that will support the combined mass of the cryostat and Tokamak (25,000 tonnes) while transferring the forces and stresses generated during plasma operations to the ground.
Engage eventually suggested mobilizing the resistance capacity of the bioshield wall (3.2 metres thick at its base) and using it as an abutment for a set of 18 deeply imbedded radial walls—the "flying buttress" solution.


The full constructability of this innovative structure, both inspired by history and unique to ITER, needed to be demonstrated however. In October 2017, a full-scale mockup, three metres high, was erected on the ITER platform to answer the questions that even the most detailed 3D models couldn't.


Six months have passed. Down on the floor of the Tokamak Pit the steel reinforcement for about one-fourth of the crown has been set into place and—thanks partly to a recently-implemented night shift—work is progressing quickly on the remaining three-fourths.


Massive steel transition pieces, 3.5 tonnes each, have been placed atop every radial wall to optimize the transfer of loads to the ground. Lengths of thin red plastic piping are being inserted into the steel rebar to circulate cooling water during the concrete pouring phase; two kilometres of this piping will be required in all for the crown. Finally, workers are busy welding a thin "fire mesh" to the outer face of the walls to within millimetric tolerances. (See gallery below for details.)


"Everything we are implementing now has been tested and validated on the mockup: the rebar installation sequence, the concrete formulation and pouring procedures, the temperature monitoring, the cooling system arrangement and sequences ..." explains Armand Gjoklaj of the ITER Building & Civil Works Section.


And the mockup's mission is not over yet—the installation procedure for high-strength "top plates" still needs to be tested and validated. These 3.5-tonne elements will sit on top of the steel transition pieces to receive 18 semi-spherical "bearings."


The first concrete pour for the crown is scheduled in mid-May and the entire structure should be finalized by September. And as all surfaces of the nuclear buildings need to be clean and decontaminable, a huge paint job will follow on the bioshield inner walls, on the crown's radial walls and on the floor.


The concrete amphitheatre of today will turn into a polished jewel box, ready to accommodate one of the most extraordinary creations of the human mind: the ITER Tokamak.


¹The liquid helium cooling circuits for the superconducting magnets pass through the cryostat. In case of a breach, the sudden drop in temperature would cause a "shrinking" of the cryostat.

Two rectangular openings in the lid allow the equipment needed for the construction of the radial walls (formwork, rebar, etc.) to be delivered to the floor of the amphitheatre and dispatched by the circular crane visible on the right of this image.

When drying, the special-formula concrete for the radial walls can reach the temperature of boiling water (due to a normal chemical reaction in drying concrete). A double cooling circuit—comprising 11 loops per radial wall—ensures that the temperature will not rise above 65 °C. The crown's 18 walls require approximately two kilometres of these thin red pipes that will eventually be filled with grout.

A pathway for the loads

Connected to the dense rebar of the radial wall, the 3.5-tonne "steel transition piece" provides a pathway for the transfer and distribution of the loads to the surrounding concrete structure.

A fire mesh under the concrete skin

A "fire mesh" is being welded to the outer rebar of each radial wall. The mesh will sit just under the "skin" (15 to 20 millimetres) of the concrete surface and prevent spalling (splintering) in the case of fire.