Wave of deliveries ahead

Share Tweet
Magnet feeders | Wave of deliveries ahead
Several batches of magnet feeder components will arrive from China in September containing elements that need to be received, inspected and readied for installation early in the ITER assembly schedule. The feeder team describes the arrivals as a "first trickle" before the wave of deliveries planned between 2020 and 2023. 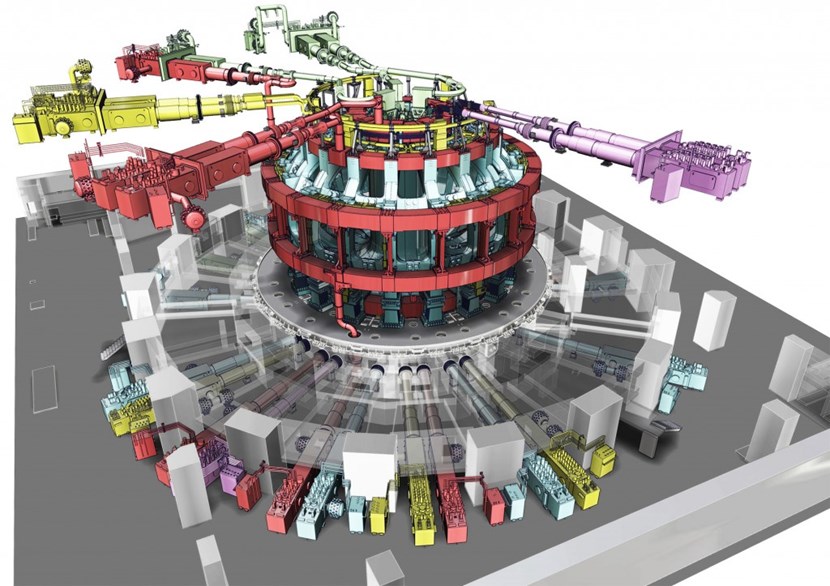 Feeder assembly activity will be concentrated in two areas of the Tokamak Building: outside the bioshield in galleries at bottom (B2) and top (L3) level, and inside of the cryostat (at the same levels) where co-activity will be very high due to the parallel installation of a large number of Tokamak systems.
Over the next four years, all the constitutive elements of the ITER magnet feeders must arrive on site to be installed in carefully coordinated sequences as part of the global machine assembly plan.


That represents more than 1,600 tonnes of equipment and approximately 100 large components.


Some of the elements arriving in September are "captive," meaning that they need to be installed in advance of other large components in the lower region of the Tokamak machine due to their size or position. Two are so large that they will be packaged in crates measuring 20 x 10 metres—nearly the size of a tennis court—requiring handling as Highly Exceptional Loads as they travel by barge and road to the ITER site from the Mediterranean Sea.


ITER's Chen-Yu Gung, who leads the Magnet Feeder Group, compares the sequencing plan to the rules that govern traffic on the roads: "If there is a violation during the assembly process, and sequencing is not followed scrupulously, this could lead to clashes and gridlocks."


Counted among the largest systems to be procured for the machine, ITER's 31 magnet feeders cover distances of 30 to 50 metres to ferry cryogens, power and instrumentation from the "warm" exterior environment outside the machine and cryostat in to the "cold" superconducting magnets operating at minus 270 °C. Under the procurement responsibility of ITER China, each feeder is manufactured in three fully instrumented segments, which are shipped to ITER for final assembly on site. 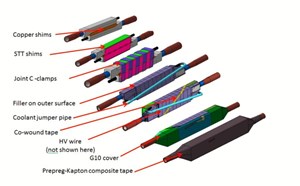 Creating (and insulating) busbar joints is one of the most complex and time-consuming operations of feeder assembly, requiring approximately 1.5 months per joint.
Farthest from the machine core will be the nine-metre-long coil termination box, shaped and sized like a shipping container, which houses warm-to-cold electrical transition equipment, remote control helium supply valves, and sensors for coil instrumentation. Situated outside of the concrete bioshield, it can be easily accessed for maintenance.


Next is the duct-like cryostat feedthrough, which provides a conduit for the power, cryogenic and instrumentation equipment as it passes through the concrete bioshield and cryostat and into the vacuum environment. The first of these—the cryostat feedthrough for poloidal field coil #4—was installed in the Tokamak Pit last year. (As the only one with a unique elbow bend, it had to take its place in a lower gallery before the concrete foundation ring supporting the cryostat was completed.)


Finally, the in-cryostat feeder is the segment that actually connects to the superconducting coils. These components take on a variety of shapes as they bend and turn inside the crowded space of the cryostat to reach the magnet connections. The largest elements arriving in September—two semi-circular-shaped in-cryostat feeders for the bottom correction coils—fall into this category.


The work to join the feeder segments will be carried out on site by specially trained contractors. The highly complex components inside the feeders (high-current busbars, high voltage cable conduits, cryolines, etc.) must be connected before the exterior casing is sealed. The most delicate—and complex—part of the job is the realization of 228 superconducting joints to connect different segments of the busbars, or to connect the busbars to the coil terminals. (More on the challenges of superconducting joints here.) 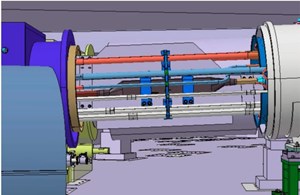 Inside of the feeder casing are the many high-technology components that need to be joined between segments: high-temperature superconducting current leads, cryogenic fluid transport pipes, high- and low-voltage instrumentation conduits, and (background) busbars. This work will be carried out by trained contractors and closely supervised by the ITER Organization.
"Feeder assembly is one of the major machine assembly activities, representing just over 11 percent of the total Tokamak machine baseline workload," says Patrick Petit, leader of the In-Cryostat Assembly Section. "As a first-of-a-kind and technically complex technology, the activity will require time and high level of supervision and quality control."


On average, it will take 8 months to assemble one feeder (from the gallery to the coil terminal) including cabling and joints. Superconducting joints will take around 1.5 months each. "It's easy to see the challenge we are facing in planning for the assembly of all 31 feeders, especially given the number of other parallel activities related to machine assembly inside of the cryostat and the tight schedule to finishing the work before cryostat closure in late 2024."


Patrick's team has clearly defined the construction work packages for feeder assembly and developed the logical sequencing of work within the highly integrated Tokamak assembly scenario. For the complex joint operations, the team is enhancing the operational guidelines that were developed during the qualification phase of individual processes. A space for training and certifying technicians and inspectors in advance of the first assembly activities is also foreseen.


"Strictly controlling operator skill as well as each assembly task is the best way to ensure the quality of these joints, which have a critical role to play in the proper functioning of the ITER magnets," according to Patrick and Chen-Yu. "We fully understand the stakes and we are ready for the challenge."