Share Tweet
Plasma-facing units | China delivers last batch to WEST
It will be very hot, next summer, on WEST plasma-facing components. Equipped with a full ITER-grade tungsten divertor, the CEA-operated tokamak will enter Phase II of its operational program, extending plasma durations up to 1,000 seconds. Last week, CEA, ITER and Chinese partners celebrated the delivery of the last batch of plasma-facing units which, once assembled in 30-degree sectors, will form the WEST divertor. Like in ITER, the actively cooled component will sustain a heat flux of up to 20 MW per square-metre—ten times more intense than what a spaceship reentering Earth's atmosphere is exposed to. 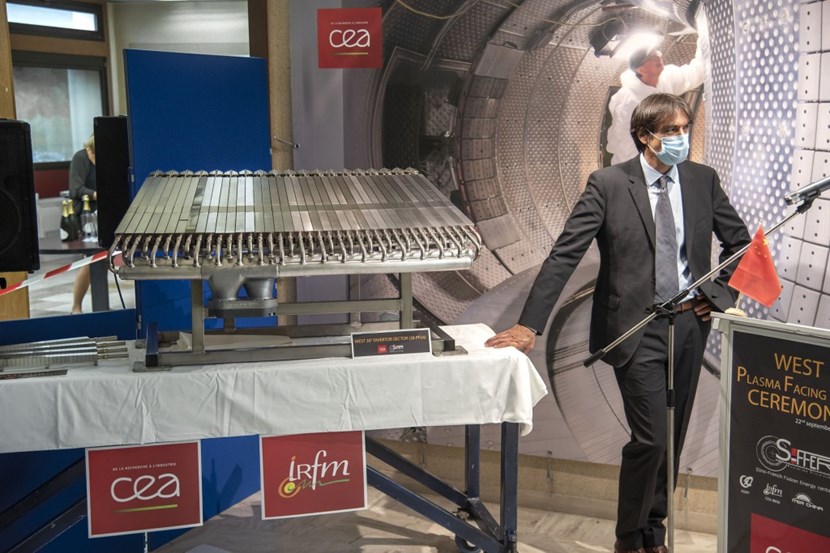 The fusion community in China and France celebrated the delivery of the last batch of plasma-facing units for the WEST ITER-grade divertor. Here, Jérôme Bucalossi, the head of IRFM, stands next to a 30° sector made of 38 plasma-facing units.
Participants to the celebration had gathered in two locations, half a world away: the EAST tokamak control room at the Institute of Plasma Physics, at China's Academy of Science in Hefei, China, and the hall outside the WEST control room at CEA-Cadarache, less than one kilometre from ITER. Other guests, ITER Director-General Bernard Bigot among them, joined the event remotely.


Initiated more than 40 years ago, the collaboration between research institutions in France and China was reinforced in 2017 with the creation of SIFFER, the SIno-French Fusion Energy centeR that brings together CEA's Institute for Magnetic Fusion Research (IRFM), ASIPP, the Southwestern Institute of Physics (SWIP) and the Chinese Domestic Agency ITER China. 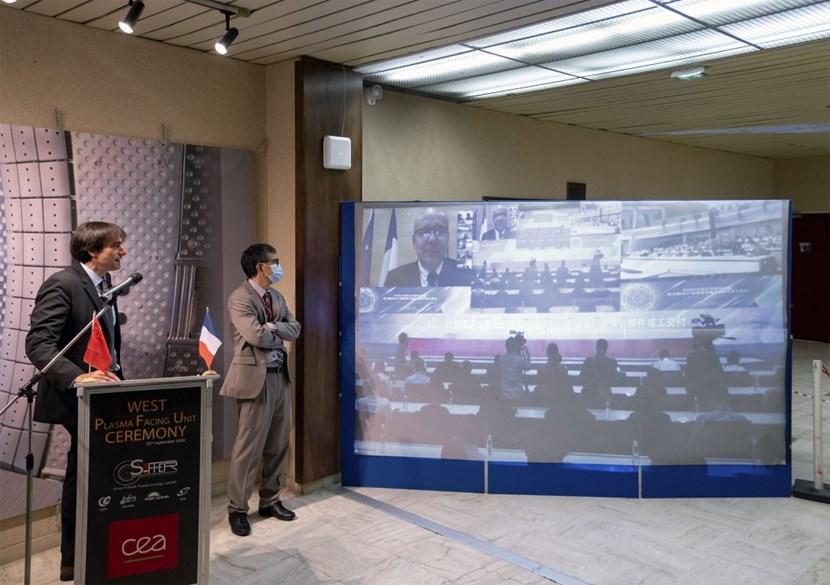 Participants to the celebration had gathered in two locations, half a world away. Here, Jérôme Bucalossi and Tuong Hoang, a fusion physicist and international relations expert at IRFM.
Through SIFFER, China has played a key role in upgrading the Tore Supra research tokamak into the ITER test bench and "risk limiter" WEST. Jérôme Bucalossi, the head of IRFM, expressed his "warmest gratitude for the huge effort" by all the members of the research consortium and particularly for the delivery of WEST's 456 ITER-like plasma-facing units.


Having assembled the plasma-facing units into sectors and the sectors into a finalized ITER-grade divertor, IRFM plans to launch Phase II of WEST operation next summer—"an important task for ITER and the next-step fusion devices," said Bucalossi.


The virtual gathering also offered an opportunity to celebrate the upcoming delivery, from ASIPP, of two of the 18 correction coils needed for ITER. "Although small compared to the main ITER magnets, correction coils integrate all the challenges of manufacturing superconducting magnets," said ITER Director-General Bernard Bigot.


Both milestones, he added, "mark another step for the study of burning plasmas."