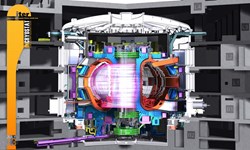 ITER ("The Way" in Latin) is one of the most ambitious energy projects in the world today.
In southern France, 35 nations* are collaborating to build the world's largest tokamak, a magnetic fusion device that has been designed to prove the feasibility of fusion as a large-scale and carbon-free source of energy based on the same principle that powers our Sun and stars.
The experimental campaign that will be carried out at ITER is crucial to advancing fusion science and preparing the way for the fusion power plants of tomorrow.
The primary objective of ITER is the investigation and demonstration of burning plasmas—plasmas in which the energy of the helium nuclei produced by the fusion reactions is enough to maintain the temperature of the plasma, thereby reducing or eliminating the need for external heating. ITER will also test the availability and integration of technologies essential for a fusion reactor (such as superconducting magnets, remote maintenance, and systems to exhaust power from the plasma) and the validity of tritium breeding module concepts that would lead in a future reactor to tritium self-sufficiency.
Thousands of engineers and scientists have contributed to the design of ITER since the idea for an international joint experiment in fusion was first launched in 1985. The ITER Members—China, the European Union, India, Japan, Korea, Russia and the United States—are now engaged in a 35-year collaboration to build and operate the ITER experimental device, and together bring fusion to the point where a demonstration fusion reactor can be designed.
We invite you to explore the ITER website for more information on the science of ITER, the ITER international collaboration and the large-scale building project that is underway in Saint Paul-lez-Durance, southern France.
*Update 31 January 2021: In parallel with the Trade and Cooperation Agreement signed by the United Kingdom and the European Union on 24 December 2020, a Nuclear Cooperation Agreement (NCA) concluded between the UK and Euratom (the legal entity through which Europe holds its membership in ITER) makes clear the intent for the UK to remain a part of Fusion for Energy, the European Domestic Agency for ITER. In practical terms it means that the ITER Organization can expect the continued full involvement and participation of UK citizens and UK companies in ITER. The 35 nations participating in ITER are: the 27 European Union countries + (through Euratom) Switzerland and the United Kingdom + China, India, Japan, Korea, the Russian Federation, and the United States.

What will ITER do?

With ten times the plasma volume of the largest machine operating today, the ITER Tokamak will be a unique experimental tool, capable of longer plasmas and better confinement. The machine has been designed specifically to:

1) Achieve a deuterium-tritium plasma in which the fusion conditions are sustained mostly by internal fusion heating
Fusion research today is at the threshold of exploring a "burning plasma"—one in which the heat from the fusion reaction is confined within the plasma efficiently enough for the self-heating effect to dominate any other form of heating. Scientists are confident that the plasmas in ITER will not only produce much more fusion energy, but will remain stable for longer periods of time.

3) Contribute to the demonstration of the integrated operation of technologies for a fusion power plant
ITER will bridge the gap between today's smaller-scale experimental fusion devices and the demonstration fusion power plants of the future. Scientists will be able to study plasmas under conditions similar to those expected in a future power plant and test technologies such as heating, control, diagnostics, cryogenics and remote maintenance.

4) Test tritium breeding
One of the missions for the later stages of ITER operation is to demonstrate the feasibility of producing tritium within the vacuum vessel. The world supply of tritium (used with deuterium to fuel the fusion reaction) is not sufficient to cover the needs of future power plants. ITER will provide a unique opportunity to test mockup in-vessel tritium breeding blankets in a real fusion environment.

5) Demonstrate the safety characteristics of a fusion device
ITER achieved an important landmark in fusion history when, in 2012, the ITER Organization was licensed as a nuclear operator in France based on the rigorous and impartial examination of its safety files. One of the primary goals of ITER operation is to demonstrate the control of the plasma and the fusion reactions with negligible consequences to the environment. 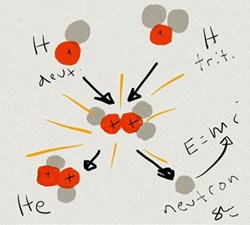 Fusion is the energy source of the Sun and stars. In the tremendous heat and gravity at the core of these stellar bodies, hydrogen nuclei collide, fuse into heavier helium atoms and release tremendous amounts of energy in the process.
Twentieth-century fusion science identified the most efficient fusion reaction in the laboratory setting to be the reaction between two hydrogen isotopes, deuterium (D) and tritium (T), as the DT fusion reaction produces the highest energy gain at the "lowest" temperatures.
Three conditions must be fulfilled to achieve fusion in a laboratory: very high temperature (on the order of 150,000,000 °C); sufficient plasma particle density (to increase the likelihood that collisions do occur); and sufficient confinement time (to hold the plasma, which has a propensity to expand, within a defined volume).
At extreme temperatures, electrons are separated from nuclei and a gas becomes a plasma—often referred to as the fourth state of matter. Fusion plasmas provide the environment in which light elements can fuse and yield energy.
In a tokamak device, powerful magnetic fields are used to confine and control the plasma.
See the Science section for more on fusion and plasmas.

What is a tokamak?

Visualization courtesy of Jamison Daniel, Oak Ridge Leadership Computing Facility
Power plants today rely either on fossil fuels, nuclear fission, or renewable sources like wind or water. Whatever the energy source, the plants generate electricity by converting mechanical power, such as the rotation of a turbine, into electrical power. In a coal-fired steam station, the combustion of coal turns water into steam and the steam in turn drives turbine generators to produce electricity.

The tokamak is an experimental machine designed to harness the energy of fusion. Inside a tokamak, the energy produced through the fusion of atoms is absorbed as heat in the walls of the vessel. Just like a conventional power plant, a fusion power plant will use this heat to produce steam and then electricity by way of turbines and generators.

The heart of a tokamak is its doughnut-shaped vacuum chamber. Inside, under the influence of extreme heat and pressure, gaseous hydrogen fuel becomes a plasma—the very environment in which hydrogen atoms can be brought to fuse and yield energy. (You can read more on this particular state of matter here.) The charged particles of the plasma can be shaped and controlled by the massive magnetic coils placed around the vessel; physicists use this important property to confine the hot plasma away from the vessel walls. The term "tokamak" comes to us from a Russian acronym that stands for "toroidal chamber with magnetic coils."

First developed by Soviet research in the late 1950s, the tokamak has been adopted around the world as the most promising configuration of magnetic fusion device. ITER will be the world's largest tokamak—twice the size of the largest machine currently in operation, with ten times the plasma chamber volume.

See the Machine section for more on the Tokamak and its components. 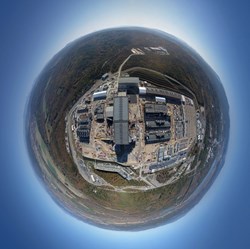 The ITER Project is a globe-spanning collaboration of 35 nations.

The ITER Members China, the European Union (through Euratom), India, Japan, Korea, Russia and the United States have combined resources to conquer one of the greatest frontiers in science—reproducing on Earth the boundless energy that fuels the Sun and the stars.

As signatories to the ITER Agreement, concluded in 2006, the seven Members will share the cost of project construction, operation and decommissioning. They also share the experimental results and any intellectual property generated by the fabrication, construction and operation phases.

Europe is responsible for the largest portion of construction costs (45.6 percent); the remainder is shared equally by China, India, Japan, Korea, Russia and the US (9.1 percent each). The Members deliver very little monetary contribution to the project: instead, nine-tenths of contributions will be delivered to the ITER Organization in the form of completed components, systems or buildings.

Taken together, the ITER Members represent three continents, over 40 languages, half of the world's population and 85 percent of global gross domestic product. In the offices of the ITER Organization and those of the seven Domestic Agencies, in laboratories and in industry, literally thousands of people are working toward the success of ITER.

The ITER Organization has also concluded non-Member technical cooperation agreements with Australia (through the Australian Nuclear Science and Technology Organisation, ANSTO, in 2016) and Kazakhstan (through Kazakhstan's National Nuclear Centre in 2017); a Memorandum of Understanding with Canada agreeing to explore the possibility of future cooperation and a Cooperation Agreement with the Thailand Institute of Nuclear Technology (2018); as well as over 70 Cooperation Agreements with international organizations, national laboratories, universities and schools.

See the Members page for links to the seven Domestic Agencies.

When will experiments begin? 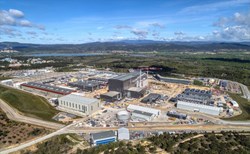 ITER's First Plasma is scheduled for December 2025*.
First Plasma will be the first time the machine is powered on, and the first act of ITER's multi-decade operational program.
On a cleared, 42-hectare site in the south of France, building has been underway since 2010. The central Tokamak Building was handed over to the ITER Organization in March 2020 for the start of machine assembly. The first major event of this new phase was the installation of the 1,250-tonne cryostat base in May 2020. In the ITER offices around the world, the exact sequence of assembly events has been carefully orchestrated and coordinated.
The successful integration and assembly of over one million components (ten million parts), built in the ITER Members' factories around the world and delivered to the ITER site constitutes a tremendous logistics and engineering challenge. The ITER Organization will be carrying out the work supported by a number of assembly contractors (nine contracts in all).
In November 2017, the project passed the halfway mark to First Plasma. (More here.) In July 2020, the project officially launched the machine assembly phase. (More here.)
ITER Timeline
2005
Decision to site the project in France
2006
Signature of the ITER Agreement
2007
Formal creation of the ITER Organization
2007-2009
Land clearing and levelling
2010-2014
Ground support structure and seismic foundations for the Tokamak
2012
Nuclear licensing milestone: ITER becomes a Basic Nuclear Installation under French law


Throughout the ITER construction phase, the Council will closely monitor the performance of the ITER Organization and the Domestic Agencies through a series of high-level project milestones. See the Milestones page for a series of incremental milestones on the way to First Plasma.

See these pages on the ITER web for more information on ITER construction and assembly.

*These milestone dates (from the 2016 ITER Baseline) will be revised as part of an update to the ITER Baseline that is underway now. The Baseline Update will take into account the effects of technical challenges and the Covid-19 pandemic on the project schedule.