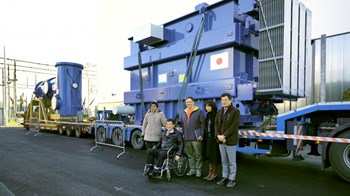 Pictured in front of the 50-ton step-up transformer, the heaviest component delivered in December: M. Sugimoto, director of the ITER project department and K. Watanabe, neutral beam expert, from the Japan Atomic Energy Agency (JAEA); V. Toigo, PRIMA projector manager at Consorzio RFX; and JAEA's M. Kashiwagi, sub-leader of the neutral beam group and technical responsible officer of the ITER neutral beam power supply, and M. Hanada, leader of the neutral beam group.
In December, a ceremony took place at the PRIMA neutral beam test facility in Padua, Italy to celebrate the arrival of the first Japanese components to this ITER-relevant research facility.


The PRIMA facility will test the neutral injection system for ITER plasma heating in advance of ITER operation. PRIMA will host two independent test beds: SPIDER, where the first full-scale ITER ion source will be tested and developed with an acceleration voltage up to 100 kV; and MITICA, which will be the first 1:1 full ITER injector aiming at operating up to the full acceleration voltage of 1 MV and a full power (16.5 MW).


Japan has successfully delivered elements of the power supply system of the MITICA test bed: a transmission line that will be filled with SF6 at 0.6 MPa and the first three 200 kV step-up transformers that are part of the DC generator.


Europe, Japan and India are all contributing components to PRIMA according to the specifications of Procurement Arrangements signed with the ITER Organization. Italy has built the facility as a voluntary contribution to the neutral beam development program; the PRIMA facility is hosted by Consorzio RFX, an Italian research laboratory for plasma physics and controlled nuclear fusion.


Neutral beam injection relies on beams of high-speed, high-energy atoms that penetrate deep into the plasma, initiating collisions and transferring their energy. Each injector is composed of a source of negative ions (deuterium), an electrostatic accelerator, a neutralizer, a separator of residual ions and finally a calorimeter. The accelerator will be working to 1 MV with a current at the grids up to 40 A with pulses lasting up to an hour. A 100-metre transmission line will deliver the electrical power to the 1MeV beam source. 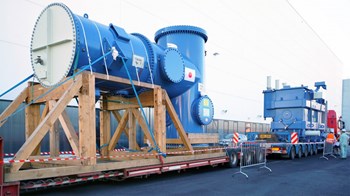 The outer tank pressure vessel, part of the 100-metre transmission line that will deliver electrical power to the 1MeV beam source.
ITER Director-General Bernard Bigot, who was present for the event, took the occasion to thank all the parties involved in the effort to build PRIMA—the Italian government for funding for the site and the buildings; Consorzio RFX as the host organization responsible for design execution and integration with a large team of dedicated scientists and engineers; the European, Japanese and Indian Domestic Agencies for procuring the components for the facility; and the ITER Organization Neutral Beam Section. He also recognized the important role played by European labs in providing the needed expertise towards the development of this facility: the French Alternative Energies and Atomic Energy Commission, CEA; the Max Planck Institute of Plasma Physics, IPP; the Karlsruhe Institute of Technology, KIT; and the Culham Centre for Fusion Energy, CCFE.


"The work that will be carried out at this facility is of prime importance to ITER. It is the first time that an ion source of ITER's dimensions—the largest ion sources ever to be built—will operate and perform to produce the beams relevant to ITER. This involves not only optimizing the source performance, but also the performance of the beam line components—for which the design and size will match the ones to be used on the heating injectors at ITER."


In 2016, three additional convoys of components from Japan will reach PRIMA.